Aerosols sometimes referred to as atmospheric aerosols are the tiny particles existing in either solid, liquid, or both forms that are suspended in the air. The diameter of these particulate matter ranges between 0.002 µm and 100 µm.

The major natural sources of aerosols are dust, sea spray, etc. whereas anthropogenic sources include the ones generated from industrial combustion processes, condensed organic vapors, etc.

Some finest examples of aerosols are smoke for vehicles, dust resulting from wind, fumes from the chimneys, etc. 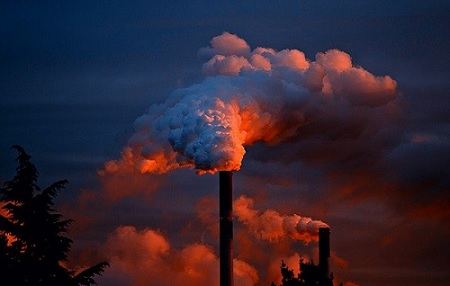 Aerosol particles exhibit a special characteristic of their ability to incoherently scatter visible light. Hence when light is passed through aerosols they act as interference in the path of transmitting light. This results in a hazy appearance in the atmosphere when the concentration of aerosols is high. Due to this feature, these are mainly differentiated from smaller gaseous molecules or molecular clusters.

One must note here that in order to scatter visible light the particle dimensions must be comparably equal or more than the wavelength of light that is to be scattered.

We have already discussed in the beginning that aerosols particles are dust, smoke, pollen, mist, fog, smog, etc. These aerosols exist in the atmosphere due to chemical processes. Generally, the size range of aerosols exists between 1nm to 100 µm in diameter. The particles fraction which is smaller than 10 µm then it may lead to various respiratory disorders.

Aerosols exist everywhere around us in the atmosphere however, the harmful nature of aerosols shows dependency on the level of their concentration. The respiratory system of the human body is very much sensitive to particle exposure. Though the respiratory system may stop the aerosols from entering the body of a particular size range, some highly concentrated toxic aerosols may cause health issues.

Mainly there are two major categories in which aerosols are classified and this classification is based on the way these are originated. Thus, the two types of aerosols are:

It is to be noted here that aerosols exhibit both warming as well as cooling effects on the climate and this type of effect depends on the size, type as well as their vertical location in the atmosphere. Aerosols are also responsible for mitigating the effects of global warming in the winter seasons. However, as every coin has two sides, extreme build-up of aerosols may cause the weakening of the Indian monsoon.

The various tiny particles in the atmosphere are responsible for increasing or decreasing the cloud cover of the Earth. The ability of aerosols to support or resist cloud formation shows dependency on the level up to which they can absorb heat. The clouds formation is prevented when the mixture of aerosols absorbs more light.  While researchers say that, cloud formation takes place easily when aerosols are lighter in color and absorb less energy.

On the basis of previous studies from NASA that clouds that give rise to heavy rainstorms are quite tall and frequent in the presence of pollution plumes and dust. It is not always necessary that only aerosols are responsible for cloud changing as various other factors like wind shifting as well as the moisture content in the air are sometimes responsible.

Mainly, climate change takes place when cloud cover changes due to excess air pollution. It is known to us that the rainfall and temperature of the earth both show dependency on cloud control so climatic conditions vary according to the pattern of cloud formation.