What is Air Pollution?

Air Pollution is defined as the contamination of air due to the presence of entities like dust, gas, mist, smoke, smog, etc. in the atmosphere. The quantities, characteristics along with the duration for which these pollutants exist in the air hinder the lives of living organisms.

The word pollution is defined as the presence of contaminants or pollutants (which are nothing but harmful substances) in the environment that cause various adverse effects to living beings.

Pollution is considered a global problem and is a major cause of worry in today’s time. It is mainly classified into the following categories:

Previously we have discussed water pollution and in today’s content, we will focus on air pollution.

Air is known to be one of the important elements that make the existence of humans on earth possible. We know that Earth is the only planet that supports life and the atmosphere plays a crucial role in supporting life on earth. The presence of hazardous substances like dust, smoke, smog, fumes, or any chemical element disturbs the atmospheric conditions that are suitable for supporting life and leads to cause unbalancing of the ecological system. 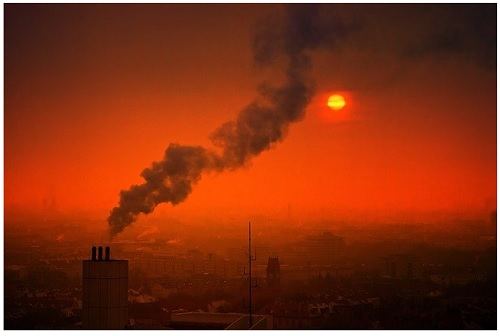 Some of the gaseous substances that are considered as the important air pollutants are:

Air pollution imbalances the quality of air that resultantly hampers the life of living organisms living on Earth. Human activities are the major reason for disturbance in the quality of air. The atmosphere is known to possess a high absorptive capacity and so the release of low amounts of pollutants does not cause serious air pollution. However, when the chemical concentration in the atmosphere increases with a considerable amount then it becomes difficult for the atmosphere to tolerate it, and resultantly, this makes the air unsuitable to breathe.

It is to be noted here that rapid industrialization along with rapid growth in population and vehicular traffic on roads has disturbed the balance of the atmosphere.

The air which is generally present in the regions which are far from industrialization and where not much human activities take place which involves the release of chemicals is considered to be clear.

Air is considered to be clean by nature. Our atmosphere which is full of air gets polluted due to human actions. However, some gaseous pollutants are also emitted by nature that includes activities like volcanic eruptions and various anthropogenic activities. Let us now see what are the major sources that contribute to air pollution.

1. Natural Sources: The natural sources that contribute to air pollution include forest fires, volcanic eruptions, vegetative decay, cosmic dust, pollen grains of flowers, deflation of sand, etc. Basically, these are originated naturally and when get mixed with the air makes the air dangerous to breathe.

In the lower atmospheric regions, due to various natural chemical reactions like oxidation, reduction, combustion, etc. gases get converted into hazardous chemicals. While in the upper region of the atmosphere, the photochemical reactions generate even more complex molecules by absorption of UV radiations.

2. Manmade Sources: When we talk about manmade sources then deforestation is considered to be one of the major causes. However, other than that burning of fossil fuels, residual emissions from vehicles, rapid industrialization, along with various agricultural actions are known to be manmade sources of air pollution.

We are aware of the fact that balancing between carbon diode and oxygen is mandatory to live peacefully on the Earth and as plants are the crucial element that helps in maintaining the required balance. We know that by the process of photosynthesis plants make their own food, they simply gain carbon dioxide and release oxygen. But the cutting of plants has shown a significant fall in the concentration of oxygen and a rise in the concentration of carbon dioxide.

Other than that, it is known to us that wood, coal, fossil fuels are the sources through which energy is produced. These are highly used in our day-to-day life as by burning them energy for homes and industries is generated. But excess of everything is bad and so burning of these fossil fuels releases dangerous gases in the atmosphere that imbalances the atmospheric conditions.

The release of harmful gases when vehicular fuel is burnt is also a major cause of air pollution. It contributes a major part to air pollution because it is known that approximately 75% of the total air pollution is due to automobile exhaust. Generally, the poisonous gases released by automobiles are carbon monoxide, nitrogen oxide, hydrocarbons, etc.

Rapid urbanization is also one of the chief contributors to air pollution. As urbanization requires deforestation, resultantly leading to increasing global warming, water scarcity thereby degrading the environmental condition. It is known that in 1900 around 160 million people in the whole world were living in urban areas however, this has considerably increased to approximately 8 billion at present.

Hence we can say that air pollution is a major cause of concern that can be controlled by human activities and by taking proper preventive actions.