If we say that there is a sender who has some data to be transmitted to the receiver. But the data that is understandable by a person or an application cannot be transmitted as it is on the transmission network. It has to be first converted into signals so that we can transmit it over the network.

Let us take an example you have to send an image to the receiver. The image first has to be changed to a form that the transmission network can accept. Now the transmission media accepts signals and transmits it’s over the physical path.

We have a popular example with which we can understand the difference between analog and digital data easily. You all must have the analog clock that is comprised of a minute hand, a second hand, and an hour’s hand. All the hands of the clock keep on rotating continuously and keep on giving continuous information.

You also might have come across the digital clock. The digital clock reports you whenever a second, minute or hours changes i.e., it will report you if 8:30 changes to 8:31.

The digital data is always in a discrete form such as the data in the computer is stored in the form of 0s and 1s. this digital data can be converted to a digital signal which can be further modulated to form an analog signal which is convenient to transmit over the transmission medium.

Like data, signals can also be analog or digital. An Analog signal can present an infinite number of values within a specified range. However, the digital data presents only limited valued and the values can be defined easily. 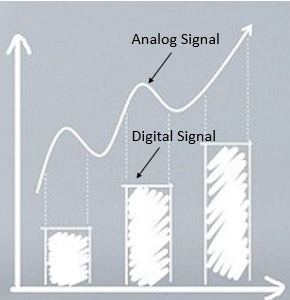 Further, we have seen that the analog and digital signals can be either periodic and digital. The periodic signal can be simple as well as concept. To transfer the data over the transmission medium we need to convert it into signals.