What is an Audit Notebook?

An audit notebook is a part of audit working papers that keeps a record of a wide range of matters that are observed during the course of the audit for which answers provided by the client are either not satisfactory or which must be included in the audit report.

It is a diary or register that the audit staff keeps to note down any errors or irregularities discovered during the audit.

It is one of the segments of auditor’s records of permanent nature which is available for the purpose of reference in the future, whenever required. It is in two parts:

An audit notebook is pertinent for an auditor particularly for the preparation of an audit report, which is to be submitted to the shareholders of the company. It is important because:

There is a list of matters which the audit notebook incorporates, this includes:

The objectives of the audit notebook are discussed hereunder: 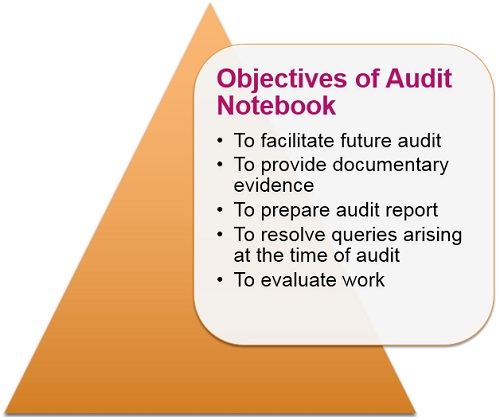 To facilitate future audit: Current year’s audit notebook facilitates the auditor when he commences audit in the subsequent year. It helps in understanding the areas requiring special consideration and attention.

To provide documentary evidence: It acts as evidence concerning the extent of work performed and the level of skill and care employed by the auditor while carrying out an audit. He can use it as documentary evidence to defend himself when a charge of negligence is filed.

To resolve queries arising at the time of audit: The client’s accounting staff may feel annoyed when the auditor comes up with queries before them on a frequent basis, during the course of the audit. And so, for the convenience of the client’s staff, audit queries must be noted down in the book whenever they arise and put before the staff for explanation altogether.

To evaluate work: If the auditor goes through the audit notebook, it is easier to understand the progress of the audit work performed and the efficiency level of the audit staff.

An audit notebook is a perfect guide for future reference. It also ensures that the audit programme has been applied appropriately. Further, the responsibility of the errors that remain unidentified can be fixed on the staff concerned. It also keeps a record of day-to-day work performed by the audit clerks. It must be noted that the audit notebook needs to be maintained in a clear, complete, and systematic manner.