Booting in operating system is a process that initiates the starting of a computer. It executes a set of instructions that is present in the ROM (BIOS). These instructions perform a power self-test that identifies if all the hardware of the system is perfectly fine, and along with this, it loads the operating system in the main memory of the system.

Booting is the process that takes place in every computer system. It hardly takes a few minutes. Let’s learn more about the process in the section ahead.

What is a Booting Process?

Booting specifies a process that takes place when we switch on our computer system. When we turn the power button on, we just supply power to the system. this power reaches the motherboard and its components and invokes them to play their part in the entire working of the computer system.

Now here, the BIOS, which is one of the components of the motherboard, start playing its part. We have discussed BIOS in our previous content, ‘Motherboard of Computer’. BIOS is a Basic Input Output System. The BIOS performs the POST, i.e., Power on Self-Test and reports if there occurs any problem in the hardware present in the system. 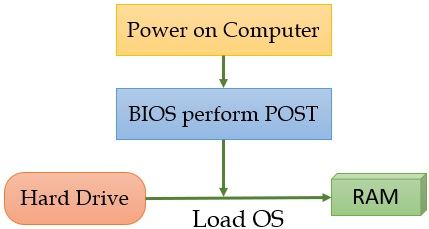 After performing POST successfully, the BIOS start displaying some of the details about the system, such as:

Although the explanation I just provide is a very simplistic version of whatever happens. But in reality, the process is very complicated.

Why is Booting Required?

Types of Booting in Operating System

If we talk about the booting process, we can differentiate it into two types, as discussed below:

When you start your computer from the start, i.e., straight away from the point where you switch on the power button and supply power to the system. We refer to it as cold booting. Cold booting performs the entire process that we discussed above. We also refer to cold booting as hard booting.

Warm booting is also referred soft booting. The warm booting takes place when the computer starts from no response or hang state. Here the computer is already in a power-on state. We also refer to this condition as rebooting.

The rebooting may take place due to various reasons such as:

There is even a shortcut to reboot the system, i.e., Ctrl+Alt+Del.

What is Dual Booting?

What is Bootable Device?

How can we have multiple operating systems on a single bootable device?

So, we conclude that booting in operating system is the process that loads OS onto the main memory of the computer. We have two kinds of booting, i.e., cold booting and warm booting.