The ground of the radiocarbon dating in simple: as all living being whether the plants or animals, directly or indirectly absorb carbon from the atmosphere through various sources especially from food they consume, this intake also includes certain amount of natural radioactive Carbon- 14.

Later on, when these living being dies, they stop absorbing the carbon-14, though the decaying process continues that also includes the radioactive carbon 14, that they have accumulated when they were alive. Therefore, estimating the left amount provides the information as how long the matter has been dead.

Professor Willard Libby was awarded with the the Nobel Prize for his contribution in determining the prehistoric age of the materials that were once alive. He adds, that ”Radiocarbon dating has transformed our understanding of the past 50,000 years”.

The process of Radiocarbon dating is totally dependent on the three isotopes of the carbon. Along with the nitrogen, oxygen, hydrogen, sulfur and phosphorus, one of the chief element is carbon also that is plays a role of building block of the biochemical molecules such as proteins, fats, and carbohydrates.

As we all know that, isotopes of a particular element have same number of protons, but they differ in the number of neutrons. Ninety-nine percent of carbon have six neutrons, therefore, 6 proton and 6 neutron gives to mass of 12, giving ‘carbon-12’. The remaining one percent of carbon atoms have either seven or eight neutron in their nuclei, resulting in the mass of 13 or 14 respectively and give as ‘carbon-13 or carbon-14’.

In comparing the isotopes of carbon , where they are chemically similar however, show variation in the masses. The numerical superscript represents the total mass of an isotope. In the case of carbon, the lighter isotopes which are 12C and 13C are stables, but the heaviest one i.e. 14C (radiocarbon) is radioactive, which means that this particular element nucleus is so large that is shows instability.

With the time, the neutrons of 14C that are generated by cosmic rays ( present in the upper atmosphere) reacts with the 14N atoms. Eventually, it get oxidized to create the 14CO2, that was released through the atmosphere, that further fuse with the 12CO2 and 13CO2. This CO2 is finally used as important component in the photosynthesis process, later on this element is passed to food chain and from here the it passes to other consumers.

So, it can be said that every plant and animal (including humans) will therefore have the same amount of 14C in comparison to the 12C from the atmosphere (the 14C:12C ratio).

When the living being die, after which there is no multiplication of cells, and therefore no tissue replacement activity takes place, apparently resulting in the radioactive decay of 14C. Radioactive dating is used as the clock’ for estimating the prehistoric dates, as it is not affected by the factors like temperature and water content.

Though, sometimes the amount of 14C may get change in atmosphere as well in plants and animals, due to effect of cosmic rays reaching the Earth, which is affected by the Earth’s magnetic field and solar activity. 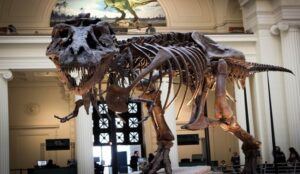 Half of the 14C of a sample will decay in a 5730 years, while in 55,000 later, the 14C gets decay in higher amount the from the remaining’s nothing can be determined. Therefore, it gets complexed to know the ratio of 14C:12C , at the time of death and present one, which is used to calculate the time.

But, now with the time, samples can be calculated with the ‘calibration curve‘, where rings of a tree can be counted, further their radiocarbon composition can be determined. There is much progression and still work is going on escalating the calibration curve, as earlier up till 2008 we were able to calibrate the radiocarbon dates of 26,000 years old materials, which is now extended up to 50,000 years.

Difficulty arises in measuring the sensitive content, where the carbon 14C content is extremely low, i.e. only 0.0000000001%. Maximum number of laboratory are using the Accelerator Mass Spectrometer (AMS) machine to detect and determine the presence of various isotopes in a sample especially 14C atoms.