Computer Network is a large number of individual interconnected computers that serve organizations’ computational needs. In the earlier days, computer systems were highly centralized. There used to be one large computer system in a single large room of the organization. This room used to have glass walls that would allow visitors to gaze at this great electronic device.

As computers begin to evolve it became a challenge for organizations to merge computer systems in such a way that they could communicate and share information with each other. Fortunately, within some decades the old model of the single computer serving all of the organization’s computational needs was replaced by the model where a large number of individual interconnected computer systems do the job.

Let us get into more detail about the topic of computer networks. We will also go through the types of networks, their topologies, and their use. So, let’s begin.

What is a Computer Network?

Well, we can say that the two computer systems are interconnected when they are capable of exchanging information with each other. Now this connection or link between the computer can be of two types:

Wired Connection – For wired connection, we can use coaxial cable, twisted pair cable, and optical fiber.

Well, the network formed using wired and wireless systems can be of different sizes shapes, and forms.

How Many Types of Networks are There?

The two general dimensions on which we can divide the types of networks are:

If talk about transmission technology then it can be broadly classified into two types:

The point-to-point link connects individual pairs of machines. That means it exactly has one sender and one receiver. This is why we also call it unicasting.

The second dimension we talked about for classifying networks into different types is scale. Distance is an important factor that can be used as a classification metric. As different technologies are used for different kinds of scales. Let us see how we classify networks on the basis of scale:

The personal area network allows devices to communicate over the range of an individual person. The range is almost over 10 meters. The best example of this is the connection of the computer with its peripherals.

Usually, we use cable for these connections but some companies have designed a short-range wireless network that we refer to as Bluetooth. Bluetooth technology is able to connect computer peripherals without wires. Bluetooth connects devices such as headsets to mobile phones, digital music players in your phone to your car, etc.

The local area network is a private network that is used to connect the computer systems present within and nearby building. Usually, LANs are used to connect personal computers to electronic devices such as printers. 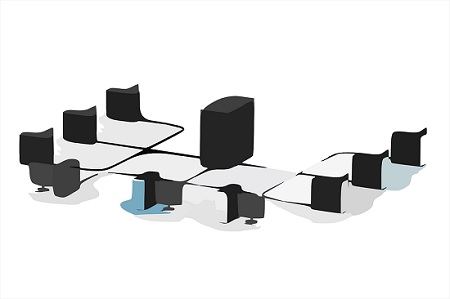 These days wireless LANs is popular for connecting computers at home, offices, cafeterias, malls, etc. This helps us in getting rid of too much of cables that would have been used to connect devices. Well in wireless LAN each computer has a radio modem and antenna installed in it that helps it to connect with the other computers in the network.

Example of a Wireless LAN is – WiFi which has a transmission speed of 11 to 100 Mbps.

Example of a Wired LAN is – Ethernet which has a transmission speed of 100 Mbps to 1 Gbps. The newer LANs are even transmitted data at the speed of 10 Gbps.

If we consider the performance, wired LAN always performs better than wireless LAN.

A wide area network is a huge network that connects several LANs, and MANs. A WAN covers a large geographical area. Usually, WAN is used by a giant business that has centers all over the world. 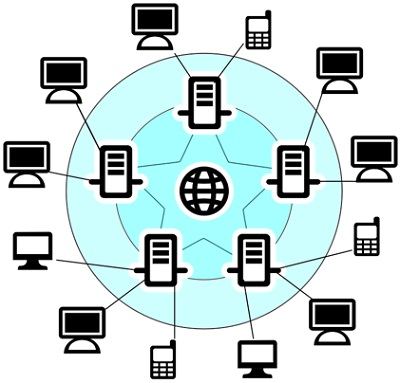 Network topology defines the structure in which the computers are connected in the network. Let’s discuss each of these topologies.

You might have heard about the VPNs i.e., Virtual Private Networks that is used to connect individual networks at different sites into extended one.

The user wants to do all the above activities from land, air, and even seas. And for this, the mobile computer needs to be connected to the network.