Costing refers to the process and technique of determining costs. It involves analysis of the information so as to help management identify the cost of production and selling, i.e. the total cost of various products and services, as well as to understand how the total cost is created.

Methods of costing differ by the industry as it relies on the nature and type of manufacturing performed. These are broadly classified into job costing and process costing. Further, costing methods are the methods used for the calculation of cost per unit.These methods are:

In job costing, the cost of each job is calculated. Job costing is applicable in all the industries wherein work is carried out when a customer’s order is received such as a printing press, a motor workshop, and so forth. In this method, the job order given by the customer is unique and needs various resources for the accomplishment of the job. It is a task that is undertaken to produce a product or deliver a service that can be uniquely identifiable. In this method, the collection of costs are undertaken on the basis of each order. For Example Ship Building, Printing, Oilwell drilling, etc.

Batch costing is a variation of job costing, which is used in industries where similar items are produced in batches of large quantities. A batch indicates the consignment of goods produced in a factory at a time. In batch costing, each batch is treated as a cost unit, and thus cost is ascertained separately. Hence, cost per unit is ascertained by dividing the cost of the batch by the total number of units produced per batch. Further, it is suitable for industries that manufacture general-purpose machine tools, utility poles, bakery items, pharmaceuticals or drugs, toys, etc.

It is another version of job costing, which is associated with building and civil engineering works. Contract costing is helpful in determining the cost of each contract individually, as the costs are duly accumulated for each order. It is applicable for firms engaged in construction work of roads, buildings, flyovers, bridges, etc.

In process costing, the cost of completing each stage of work is determined. This method is appropriate for manufacturing and producing entities, wherein a series of continuous as well as repetitive activities, operations are involved. It manufactures thousands of units of the same product, during a period, such as paper, soap, textiles, bread, detergent, sugar, etc.

Those organizations which are engaged in rendering services such as transport, water supply, retail trade, railway, bus, boiler houses, hotels, power distribution, etc use this method for ascertaining cost. Here, each service is treated as a separate unit. In this method the cost of providing or operating service is determined. Cost per unit is ascertained by dividing the total cost by the units of services provided in operating costing.

Single Output Costing is applicable to the industries that produce a particular product like brick kilns, paper mills, flour mills, cement industry, steel industry. Here, the whole production cycle is costed and the cost per unit is derived by dividing total accumulated costs by the number of units produced.

Otherwise called composite costing, in this a combination of two or more methods of costing. This method is used by industries where the manufacturing process used in the production of products is complex in nature and any one method of costing cannot be used for the ascertainment of costs a combination of different costing methods is used which is called multiple costing. Industries like radio, engines, automobiles, airplanes, refrigerators, television, air conditioners, etc use this method.

Techniques imply the principles to be followed for ascertaining the cost of the products manufactured or services rendered. The various techniques of costing are: 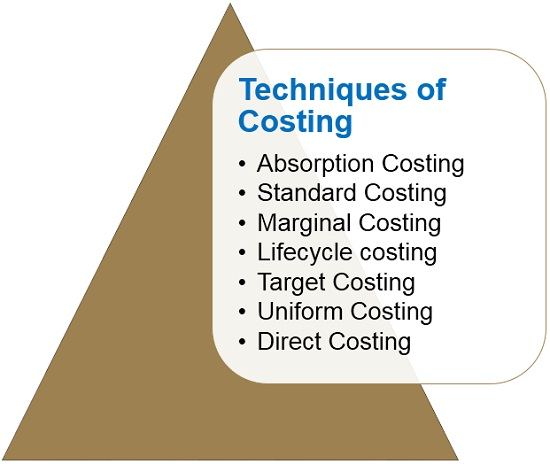 An ideal costing system is one that is accurate, simple, equitable, elastic, comparable, prompt, and economic. It is one that fulfills all the objectives and provides periodical results to the firm. It also helps in the reconciliation with financial accounts.