In parallel data transmission, multiple bits are sent in each clock cycle. As we know digital data is in the form of 0s and 1s. These binary bits are organized into a small group of n bits (usually 8 bits or byte/character) and the computer sends and receives data in a group of bits. 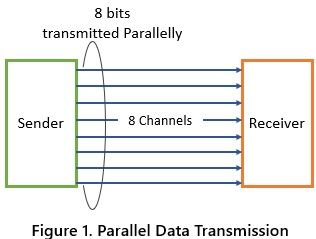 In serial transmission, there is a single channel line between the sender and the receiver, and the bits are transferred in a bit-serial fashion. Only one bit is transmitted at a time which when transmitted successfully is then followed by the next bit to be transmitted. 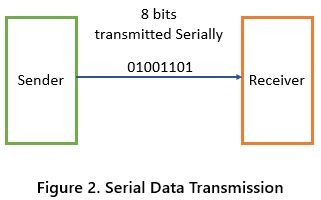 In asynchronous transmission, the bitstream is grouped into bytes (8-bits). Here the clock of sender and receiver are not synchronized. The sender sends this group of bits over the channel whenever the group of bits is ready to be transmitted. 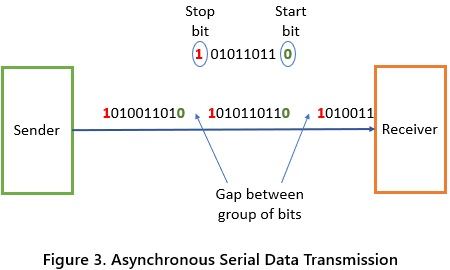 A start bit (0) and end bit (1) are attached to every sent byte so that the receiver gets alter of the arrival and end of every new byte. Transmission of each byte may be followed by a gap of varying time this can be filled by the stop bits.

In synchronous transmission, the bitstream is grouped into longer ‘frames’, where each frame consists of multiple bytes. In a frame there is no gap between the bytes, the receiver has to recognize the separate bytes into the frame.

In this way, data transmission defines several techniques to transfer data between digital devices. We have seen the behavior and performance of each technique.