Hard Water and Soft Water are the two terminologies generally used for classifying the types of water. You must be thinking, plain water is always crystal clear then how can one say it is hard or soft water.

The nature of water whether it is hard or soft is classified on the basis of the presence of the concentration of minerals (calcium and magnesium) in the water. 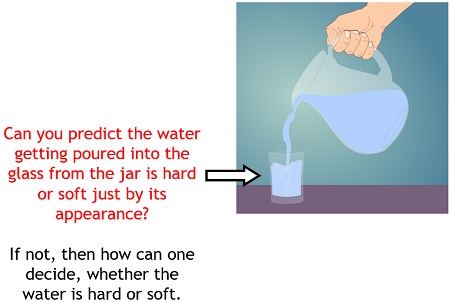 Difference Between Hard and Soft Water

When reacts with Soap

When hard water reacts with soap then it does not produce lather. While soft water forms lather when it is reacted with soap or detergent.

Which is beneficial for health?

Hard water is comparatively healthier to drink than soft water. Basically, the presence of a high amount of minerals in hard water makes it suitable for drinking as it makes a contribution to the dietary requirement of essential minerals in our body. On the other side, low or almost negligible minerals are present in soft water thus, it is not regarded to possess that much healthy nature.

On visually noticing both hard water and soft water appears to be the same i.e., plane and transparent. However, the taste of the two types of water is quite different. Hard water has a somewhat better taste than soft water because the presence of sodium ions in soft water makes it salty in taste. While hard water has a characteristic taste (tasteless or sometimes little sweet).

The boiling point of these two types of water is also different. Hard water has a high boiling point in comparison to soft water. Thus, hard water when used for the purpose of cooking consumes comparatively more amount of fuel than soft water of the same quantity.

Effects on Skin, Hair, and Clothes

In terms of cleaning benefits, soft water is more advantageous than hard water because the former cleanses out soap easily. Thus, the former puts harmless effects on skin and hair. On the other side, hard water is quite harmful to skin and hair as the residual soap on the skin after bathing in hard water traps bacteria resulting in disturbing the normal pH balance, thereby drying the skin.

When hard water reacts with the surface of a material, then it results in limescale deposits on the surface while this is not the case with soft water. Due to this reason water spots in utensils, or windows are left behind in case when hard water is used.

When any electrical appliance like a water heater is used then their amount of energy usage depends on the type of water it is using. Appliances that use hard water consume more power than soft water. Also, the equipment that makes use of soft water possesses longer life of about 30% to 50% than the ones that use hard water.

Generally, the use of hard water leads to the chances of galvanic corrosion which takes place when electrolytes of hard water react with other metallic surfaces. As against, this is not the case with soft water. Thus, by observing the metallic surfaces which come in contact with water on a regular basis one can say whether the water is of hard nature or soft. If the surface is getting pale yellow or becomes dull then the water is hard otherwise it is soft.

Rainwater is considered to be one of the best examples of soft water. But it reacts with minerals like lime, calcium, and magnesium on its way towards the ground. Thus, becomes hard.

In order to get soft water from hard water, there are water softening schemes that are to be utilized. For softening a small quantity of water that is moderately hard, boiling of water or using vinegar helps in the removal of minerals. However, sometimes hard water is passed through ion exchange resins which are nothing but complex sodium salts.  When water flows through it, sodium gets dissolved in water leading to the precipitation of minerals on the resin surface.