What is Diffraction of light?

Diffraction of light is an act defined as the bending of light rays across the edges of a surface. Diffraction is regarded as a universal phenomenon possessed by waves.

A major question arises just by reading out the definition of diffraction that where it is observed and how this happens.

So, in simplest form, one can answer this in a way that sound, light and matter waves exhibit the phenomenon of diffraction and this happens whenever a wavefront of a wave or a part of it gets obstructed by an obstacle during the propagation of the wave.

We have already got the idea that whenever a wave appears to get obstructed by any hurdle then it results in diffraction. Basically, this is the result of the fact that when light is allowed to pass through a small opening, then it gets spread or disperse over the geometrical shadow region.

A noteworthy point over here is that the size of the obstacle and the wavelength of light are the two parameters on which the ease with which diffraction occurs is measured.

A wave possessing a long wavelength has the ability to bend more easily in comparison to the shorter wavelength.

According to Huygens’s, diffraction is stated in a way that-

Each individual point that is not obstructed on the wavefront functions as a source of secondary spherical waves. This principle states that when light incidents on two separate slits then they get spread out resulting in an interference pattern at the other side of the region. The pattern is known as a diffraction pattern. This is clearly shown below: 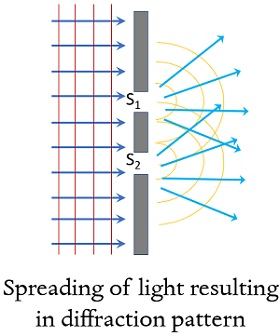 However, if we consider the case of no bending of lightwave then even after coming out of the slit it will propagate in straight lines and there will be no diffraction pattern at the other side. 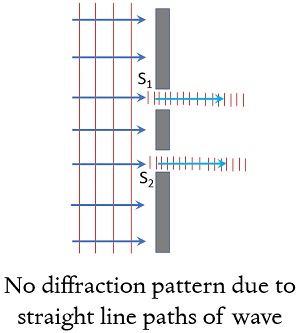 Fraunhofer Diffraction: Also know as far-field diffraction. The reason for calling it so is that there exists sufficiently large (or infinite) distance between the light source, observation screen and the object. To get this, convex lenses are placed between the source, the obstacle and the observer. In such arrangement, the diffraction pattern for the plane wave incidenting on the diffracting aperture is seen on the focal plane of the lens.

Fresnel Diffraction: Also known as near field diffraction. It is given this name because here either source, observer or both have a finite amount of distance from the diffracting aperture. Fraunhofer diffraction is regarded as a special case of Fresnel.

A visible light possesses a wavelength between 400 to 700 nm. To produce diffraction, we require the following:

The figure below represents a schematic of the experimental setup to observe Fresnel diffraction:

In the above arrangement, there is a box of length 5m whose front edge has a pinhole. Also, within the box, there is an obstacle present at a 2m distance from the pinhole and a photographic plate that is movable that captures the pattern.

The light emitted from an incandescent lamp of 100 W is focused towards the box using a convex lens. However, in between the lens and the pinhole, there is a red filter that generates monochromatic light of wavelength 632 nm which reaches the pinhole.

Here we have a spherical obstacle in the form of steel ball bearings of radii 1.58 mm. A photographic plate with a distance of 180 cm from that of the obstacle produces a diffraction pattern as shown below: 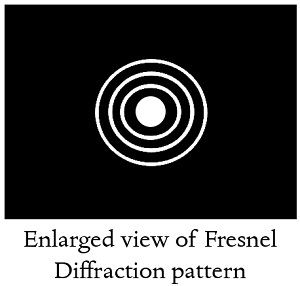 Here the pattern is circular fringes around a spherical spot. However, as the distance from source and observer with the screen changes then the diffraction pattern also shows variation.