What is Digestive System?

The series of processes that are followed after the intake of food by the mouth up till it is finally excreted is the whole mechanism of digestion and thus the system is known as the digestive system. This (digestive system) consists of the gastrointestinal tract (GI), pancreas, liver, and gallbladder.

The GI tract is the chain of hollow organs connected from the mouth to the anus with twisted, and long tubes. These hollow organs are the mouth, esophagus, stomach, small intestine, large intestine, and anus; while other organs such as the gallbladder, liver, and pancreas are said as the solid organs of the digestive system.

Digestion is the vital process to get the energy, which is used by the body for growth, cell repair, increase in immunity, and to work. The food that we eat is broken down into small particles and then converted into nutrients and thus energy is used, these nutrients are in the form of proteins, carbohydrates vitamins, and minerals.

Constituents of the Digestive System

The main parts that make up the digestive system are the mouth, esophagus, stomach, small intestine, large intestine, rectum, and anus, helping organs are the pancreas, gall bladder, and liver. Further, we will discuss the functioning of this digestive system: 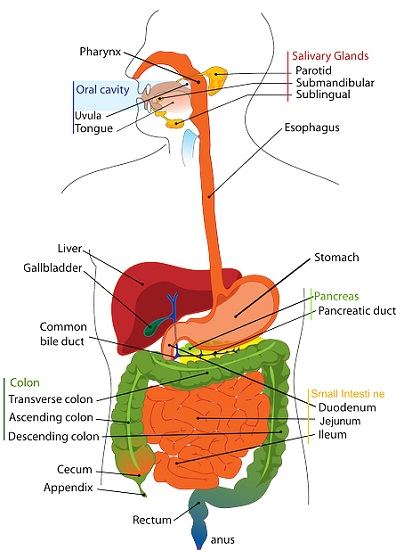 Our mouth is the beginning of the process of digestion, firstly the body creates saliva right after seeing and smelling any food, later on when we take that food in our mouth, it is chewed to break down into the simplest form so that it can be absorbable and further processes. With the help of the tongue, the food is swallowed and passed down to the throat and then the esophagus.

It is found near the trachea in the throat region, the food is passed over here after swallowing, now the epiglottis will work by preventing choking of the swallowed food. Epiglottis is the small flap, folding over the windpipe. Afterward, with the peristalsis, the food is sent to the stomach. Peristalsis is the series of muscle contractions in the esophagus.

Before the food is passed away to the stomach, there is a ring-like muscle just beneath the esophagus known as the lower esophageal sphincter, that contracts and relax with the passing of food to the stomach.

The esophageal sphincter when relaxed, allows the food to enter the stomach, and when it contract it prevents the food constituents to travel back to the esophagus. (when this process of contraction and relaxation gets weakens or slow, the person may likely feel acid reflux or heartburn).

In this hollow structure, a repository of food is allowed to mix with the enzymes (digestive enzymes).

Now here the food is again turned into the usable form, the strong and highly active enzymes, and chemicals secreted by the cells of the stomach works actively for the breakdown process. After which the processed food is transferred to the small intestine.

Now, here the food content is further broken down undergoing a series of mechanisms and involvement of a few parts of the intestine like the duodenum, jejunum, and ileum. A 22-foot muscular tube supports in cracking down of food with the support of enzymes released by the bile pigment of the liver and pancreas.

The duodenum initiates the process of fragmenting or crunching the food, joined by the jejunum and ileum that help in extracting the nutrients and transferring them into the bloodstream.

Moreover, the bile, enzymes, mucus, and enzymes act upon the remaining to change into the consistent semi-liquids form. This material after so long process is passed from the small intestine to the large intestine also known as the colon.

The enzymes released by the pancreas into the duodenum of the small intestine, contribute to breaking down fats, proteins, and carbohydrates. The crucial role of the pancreas is in releasing the hormone ‘insulin’ into the bloodstream, chiefly used for metabolizing sugar.

The chemical factory of the body supports absorbing and digesting vitamins and fats from the digested food. This work is done by the key component of the liver – ‘Bile’. The liver also destroys harmful substances, even releases some toxic chemicals and drugs also.

The gallbladder stores and send chemicals like bile from the liver into the duodenum of the small intestine for the enhancement of absorption and digestion.

It is helpful in processing the remaining’s, it is a muscular connecting tube of 6- feet long, extending from small intestine to rectum. The large intestine consists of the cecum, and the various forms of the colon like – right, left, transverse and sigmoid colon.

The waste or the remaining food is passed by the colon through the peristalsis. Beginning with the liquid and afterward solid form. These waste products of digestion become a stool, which is food debris and large and unprocessed food. These bacteria also synthesize nutrients and vitamins and prevent the against toxic or harmful bacteria.

The 8- inch chamber connects the colon to the anus. The rectum triggers the signals to evacuate or poop out the stool or fecal matter, that it has received from the colon.

So, this is all about the digestive system.