Discipline refers to orderliness (state of order), i.e. when there is no chaos, irregularity, misconduct, and hustle in worker’s behavior. Hence, discipline results in working, cooperating, coordinating, and behaving in a proper manner, in which a normal person is expected to behave.

In the context of the organization, discipline means workers conform to the rules and norms designed by the company for acceptable behavior. It is a kind of check or restraint on the liberty of an organization’s workers, which not just rectifies or modifies but also improves and strengthens a person’s behavior.

It is an attitude of mind, the output of organization culture and overall environment.

It is the non-conformity to the company’s rules and regulations be it formal or informal. It takes place due to poor management, error in judgment while choosing the union leader, and wrongly understanding the policy of management.

The several principles for a good discipline are given hereunder: 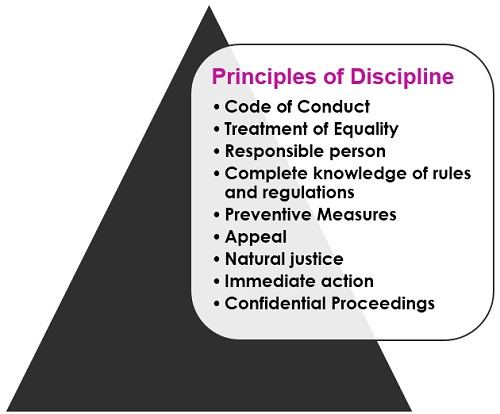 Code of Conduct: With the consent of both employers and workers code of conduct, i.e. rules and regulations can be created which ensures maintenance of discipline in the company. The rules are formulated in such a way that every person understands and follows them. These rules are communicated to all the members at the time of induction.

Treatment of Equality: Each and every worker in the company is equal and so their treatment should also be equal. There should be no partiality, and if anyone disobeys the rules, then he/she should be punished, regardless of his role, gender, or position in the company.

Responsible person: The responsibility regarding the disciplinary action taken at the time of disobedience by an employee, should be given in the hands of the responsible person who is authorized to give orders to the subordinates.

Preventive Measures: The company’s management should lay more emphasis on the preventive measure, i.e. positive discipline, rather than a negative one, which is a corrective measure.

Appeal: The supervisor or foreman has the responsibility of discipline, i.e. it is his duty to prove the act of indiscipline and the accused has the right to make an appeal to the top executives, to prove his innocence.

Natural justice: The principle of natural justice needs to be adopted. And to do so, causes of indiscipline are examined without any bias. The accused must be given the opportunity of being heard and express his side of the story and thereafter the decision is taken.

Immediate action: For any indiscipline by a worker, prompt disciplinary action should be taken because when the decisions are delayed, the deterrent effect will not be achieved.

Confidential Proceedings: The proceedings must be confidential, in the sense that they should not be convened in the presence of any other persons apart from the accused and concerned persons. This is because it gives a wrong impression to other people about the accused and he loses his faith in the company.

The different reasons for taking disciplinary action are:

There are two types of discipline, discussed hereunder: 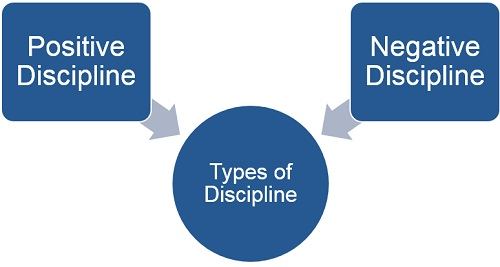 It is a reformative approach, wherein the worker is motivated to work himself and is ready to obey the rules. This approach encompasses creating an attitude and organizational culture or climate wherein the employees on their own conform to the rules and regulations framed.

In this, the workers are immediately warned or punished whenever they do something wrong or do not perform the assigned task, or do something against the instructions of the supervisor. Workers already have an idea about the nature and quantity of punishment they get for doing or not doing the act.

Workplace discipline is regarded as a condition that exists in the organization. The employees have knowledge of what is expected of them, as to the rules, standards, and policies of the firm. It aims at teaching the employees about the desired behavior in a systematic manner. It is vital for a healthy industrial atmosphere and the attainment of the organization’s objectives.