What is an Ecosystem?

The word ecosystem is defined as a unit of nature that includes living organisms along with the physical environment interacting with each other. An ecosystem can be as small as a small pond or as large as a sea.

The whole ecosystem is mainly classified into two categories namely, terrestrial and aquatic. The terrestrial part includes forest, grassland, desert, wetland, coastal region, etc. while aquatic parts are river, pond, lake, sea, etc. Other than these there is a man-made ecosystem whose examples can be crop fields or aquariums.

We know that there are two basic components of an environment namely, abiotic and biotic and both biotic and abiotic components affect each other within the surrounding. There are various components of the ecosystem and all of them function as a unit in order to maintain productivity, decomposition, the flow of energy as well as nutrient cycle. 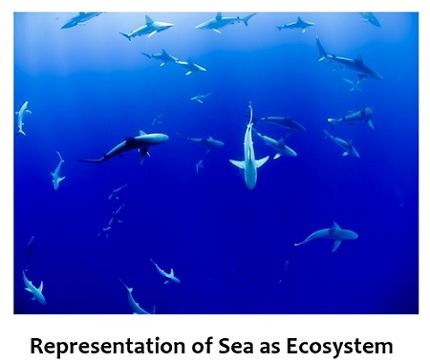 Concerning the national levels, the ecosystem forms the biogeographic regions. The various natural ecosystems are forests, deserts, the sea, etc.

Now, one must be thinking that how an ecosystem works?

So, in simplest terms, this can be answered in a way that for the functioning of the ecosystem, various biochemical cycles, and energy transfer mechanisms are responsible. In order to understand the working of any ecosystem, the first step involves the knowledge of the various components that is constituting the same. Once the components are known then one can judge the other characteristics of the system like air, water, climate, soil, etc. along with the behavior of its biotic components like plants and animals.

The idea of the above-discussed parameters is important as the various aspects of the ecosystem interact with each other and exhibit the necessary functionality in order to form nature’s ecosystem. Basically, in any ecosystem plants, herbivores and carnivores combinedly form the food chain. The ‘web of life’ is the byproduct of the combination of such chains and the energy used by them is obtained from the sun in order to power the ecosystem.

We know in order to sustain life on the Earth, the ecosystem is crucially important. The reason for the same is that the ecosystem offers us such products on which various ecological processes depend and this resultantly promotes human civilization.

However, as every coin has two sides the same is the case with the ecosystem. Though the ecosystem supports life on earth, human activities disrupt the ecosystem in a way that various human actions cause the extinction of various plant and animal species. Sometimes the elimination of species hinders the balance of the ecosystem at a higher level. Such species are regarded as keystone species.

It is to be noted here that mainly extinction is associated with variations in land usage. We know that to get timber, deforestation of forests is done, to get large agricultural land, the wetlands are drained. Not only this, the pollution caused due to industries and urban wastes also causes the extinction of various species up to large extent.

The various environmental and aesthetic goods and services in some or the other way is an outcome of a healthy ecosystem. The products obtained from various ecosystem processes are known as ecosystem services. For example, if we consider a healthy forest as an ecosystem then we know that it is responsible for providing purified air and water along with mitigating droughts and floods, maintaining nutrient cycle, providing wildlife habitat, maintaining biodiversity, etc.

One must note here that out of the overall pricing involved in different ecosystem services, approximately 50% is utilized in soil formation while less than 10% is used in other services like nutrient cycle. Almost around 6% of the total cost is individually used for regulating climate and maintaining wildlife habitat.