The electric field intensity is defined as the amount of force that a unit charge experiences when placed in an electric field. It is a vector quantity as its value is defined by magnitude along with the direction.

The symbolic representation used for electric field intensity is E.

What is an Electric Charge?

The fundamental quantity responsible for the generation of electricity is known as electric charge.

We know that the smallest particle from which all materials are composed is an atom. However, there are three sub-atomic particles of an atom, namely, electron, proton and neutron. Electrons and protons are referred to as charged particles. The electrons are negatively charged particles, while protons possess positive charge, and neutrons are neutral.

The charge is regarded as the fundamental property of an atom, due to which the nearby objects experience either attractive or repulsive forces.

The two types of charges are:

The amount of charge possessed by a material is measured in Coulombs.

This property of charge is the reason why bodies present in the electric field experience a certain force.

Before proceeding with the discussion further with electric field intensity. See,

What is an Electric Field?

You all may have read the definition of the electric field many times before coming across this article. Let us understand the term electric field here in the simplest possible way.

Suppose we have an electric charge present at a point in space, and definitely its presence will have some effect on its surrounding region. So, the space or region up to which the effect of that particular charge exists is its Electric Field. 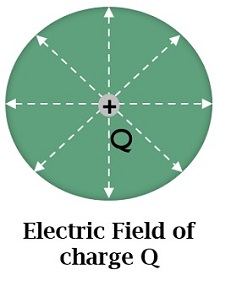 This effect is nothing but a force which the charge exerts on the other charge which is present in the region around it.

It is noteworthy here that the electric field produced due to the presence of a stationary charge in space is time-invariant in nature. Thus, known as the static electric field.

Must Read: Components of Electric Circuit

What is Electric Field Intensity?

Electric field intensity is the amount of force a unit charge experiences when present in an electric field.

Both magnitudes, as well as directions are associated with electric field intensity. This is so because when the source charge is of positive polarity, then the strength of the electric field is necessarily directed away from the test charge (of the same polarity). As against, when the source charge is negative, then the field intensity is directed in the direction towards the test charge (with opposite polarity).

This is the reason this quantity is a vector in nature.

Suppose a charge Q is present in a vacuum at a certain point. If we place another charge, say q, in the region near it, then the charge Q will apply some force, say F, to the charge q. 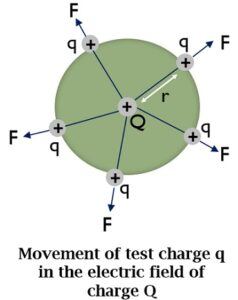 The reason behind this is that there exists a field near the region where Q is placed. So, when another charge is placed in this field, then it acts on the charge, and this results in force.

According to Coulomb’s Law, the force experienced by q when present in the field generated by Q is given as:

Further, the force per unit charge will be,

It is to be noted here that as q is also a charged particle thus, it will also have its electric field, and so it will also apply a certain amount of force on Q. This is the reason q, i.e., test charge, is considered negligibly small.

Basically, magnitude-wise, the electric field is the force exerted per unit charge. Thus, given as,

As force is measured in newtons while the unit of charge is the coulomb. Thus, the unit for electric field intensity is Newton per Coulomb (N/C).

Also, we know the electric potential is given as:

Thus, Volt/metre (V/m) is another unit that we use for measuring the electric field intensity.