What is Electromotive Force?

Electromotive Force is an electrical phenomenon which results in the generation of electric potential (voltage). Electrochemical cells or changing magnetic fields generally give rise to electromotive force.

It is the fundamental property of an energy source that permits the motion of charges within the circuit.

Basically, non-electrical energy sources give rise to electromotive force by changing one form of energy into another. More specifically, a source of emf is a device that provides electrical energy.

Some examples of sources of emf are as follows:

Symbolically, the electromotive force is represented as E, and it is abbreviated as emf.

The involvement of the term ‘force’ in emf makes it quite confusing. But, it must be clear to you that here we are not dealing with any kind of external force. The electromotive force implies the energy per unit charge that is used for separating the charges.

More specifically, it can be said in a way that, inside the cell, there exist some internal forces due to which the charges inside it move.

This separation and movement of electrons result in an electric current.

Hence, an electromotive force is not any kind of force. But, a potential difference that causes the flow of current in a circuit.

What is Electromotive Force?

You must be thinking that how a non-electrical energy source gives rise to the flow of electric current when connected in a circuit.

A battery, when present as a single unit and not connected to any circuit despite holding the charge, does not have any flow of current. But how its presence in a complete circuit causes the generation and maintenance of the flow of electric current.

So, to understand this consider the circuit shown below with a source of emf (battery) connected to a bulb. 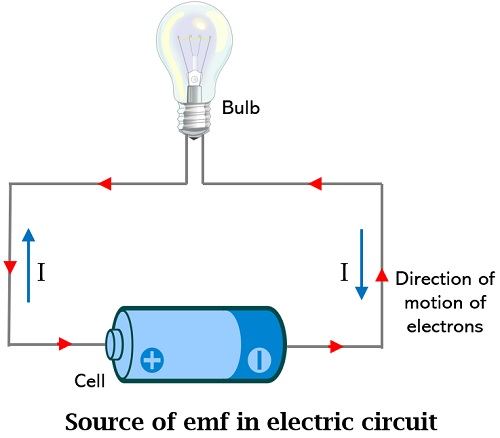 Here we have taken a battery of 9V, which is a two-terminal device whose one terminal is comparatively at a higher potential than the other.

When the source of emf is connected to the bulb, then electrons start moving from the negative terminal of the battery through the bulb towards the positive terminal of the battery. The movement of charges generates an electric current (that flows in the opposite direction of the electron flow). This leads to cause the lightening of the bulb connected to the circuit.

You must note here that some amount of work must be done to move the negative charges from the positive terminal towards the negative terminal. So, the energy required to do the work is obtained from the chemical reactions within the battery.

Ideally, a battery possesses zero internal resistance. Thus, the terminal voltage is equivalent to the emf supplied by the battery.

We have recently discussed that emf is the work done on the unit charge to maintain the difference in potential between the two ends. Thus,

Since work done (energy) is expressed in Joules and the unit of charge is Coulomb. Therefore,