What is Energy Conversion?

Generally, the energy (existing in natural form) is converted into a form that can be used by humans for their various uses.

The capacity with which a task or work is performed is defined as energy. It is of convertible and transferrable nature.

Sometimes people might have confusion between energy transformation and energy transfer as they understand the two as synonyms of each other.

Energy transfer basically indicates the movement of energy from one place to another for some sort of application with proper resources. While energy transformation indicates the changing of the existing form of energy to a different form. 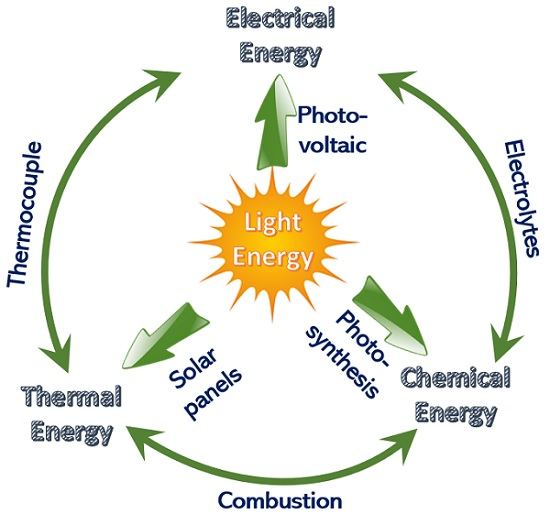 You must note a point over here that while converting energy from one form to another the total amount of energy remains the same.

Law of Conversion of Energy

Law of Conservation of Energy is also the first law of thermodynamics. It states that one can neither create energy nor destroy it as it can only be changed from one form to another.

The theory of energy conversion applies to each and every form of energy. Like, kinetic, potential, light, heat, nuclear, sound energy, etc. The transformation of energy from one form to another can be done with the use of proper resources repeatedly. However, some parameters like friction effect or air pressure, affect the conversion of energy.

Let us now move forward and understand the conversion of energy from one form to another by considering some examples from our day to day life.

Glowing of bulb or lamp in the room when power is supplied to it from the electric supply.

Eating of food by a human or animal and utilizing the energy obtained from it to walk or run or to do any other task.

The solar energy supplied by the sun helps in the process of photosynthesis by which plants make their own food.

Fast running generates heat inside the body which is in motion.

A windmill converts the energy obtained from the wind into mechanical energy (rotational motion) that is further used for various applications.

When the energy in the form of electricity is provided to a sound system then it results in producing vibration resulting in providing music or respective sound through it.

When a wooden log is burnt then the chemical reaction taking place results in giving rise to heat energy as well as light energy.

Microphones convert the sound energy provided to the mike into the electrical energy.

Thermocouples are very famous for converting the heat or temperature variation into adequate electrical energy.

The stored or moving water in dams and rivers are used to produce electricity for transmission purpose.