What is Environmental Degradation?

Environmental Degradation is defined as the deterioration of the earth’s environment due to the depletion of natural resources present in our surroundings like air, water, and soil. It is considered a common concern for humankind.

Before exploring environmental degradation, let us understand about

What is the Environment?

The environment is a terminology that exhibits numerous definitions or interpretations. The word environment is originated from the environs which mean surroundings. Hence environment for an individual entity or element is defined as its surrounding region consisting of natural or artificial resources or entities.

Thus, one can define the term environment as anything that constitutes our surround or it is the region or space within which interconnection between various entities exists.

Environmental Degradation is emerging as one of the serious problems emerging worldwide that is leading to cause other hazardous issues like pollution, animal extinction, global warming, desertification, etc. Thus, it is not wrong to say that environmental degradation is the result of various socio-economic development as well as technological activities.

The pictorial representation below provides the layout of the causes that leads to environmental degradation. 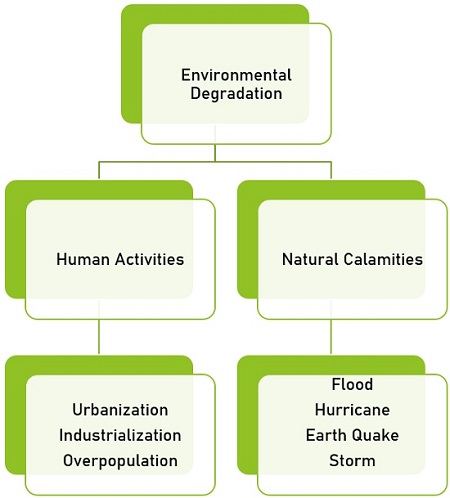 As we have already discussed that both humans, as well as natural activities, are responsible for environmental degradation. Talking about human activities so industrialization is responsible for the emission of various harmful gases in the environment such as Carbon Monoxide, Nitrogen Oxide, Chlorofluorocarbon, etc. along with various dust pollutes. Excessive urbanization is resulting in air, water, soil, and sound pollution.

Some of the major causes are discussed below:

Pollution: Pollution is the presence of contaminants in the earth’s atmosphere in any of its natural elements such as air, water, or soil. These contaminants are hazardous to human health and other living bodies thus are regarded as pollutants and cause detrimental effects.

Water Pollution occurs when toxic chemicals get mixed with water bodies like lakes, seas or rivers, etc. This leads to cause disturbance in biotic life.

Air Pollution occurs when toxic gases such as carbon dioxide, sulfur dioxide, nitrogen dioxide, etc. emitted from industries and automobiles get mixed with the air. These mixed particulates in the air make the air harmful to breathe.

Soil Pollution is caused when toxic chemicals from agricultural or industrial activities are mixed with soil thereby making it dangerous to produce vegetables or fruits that are consumed by humans. Mainly the fertilizers used in agricultural activities or the industrial wastes contribute to soil pollution.

Global Warming: Global Warming is the abnormal increase in the earth’s atmospheric temperature globally. Global warming is an outcome of events like deforestation, unbalanced climatic conditions, expansion of deserts, rise in sea levels, etc. Global warming leads to cause harmful effects on humans, agricultural growth as well as aquatic life. Global warming can lead to cause heat-related diseases along with causing malaria, dengue, viral fever, etc. Not only this, it may bring droughts, hurricanes, etc. that can cause insufficiency of food.

Deforestation: Deforestation is one of the major causes of concern relative to environmental degradation. We know that forests are a crucial part of our life as it provides raw materials such as timber for industrial purposes as well as habitats to animals and microorganisms.  Not only this, the forests provide fertile soil that is nutrient-rich for growing various beneficial plants. Deforestation is the cutting down of trees for home or industrial purposes that has reduced the use of forests for purposes like agriculture, harvesting, animal grazing, etc.

Natural Causes: Natural calamities like storms, tides, forest fires, quakes, avalanches, etc. leads to disturbing the region where animal, plants and human live thereby making it difficult for survival. We are mentioning from the beginning that environmental degradation is associated with human activities however, it is also true that the environment possesses changeable nature. Even if we keep aside human activities then also there are various biological systems that degrade the natural habitat that supports life.

Land Degradation:  It can be due to natural or manmade activities. Soil or land degradation mainly is a combined effect of climate change and human activities. It is said that with the disturbance in surface soil, the surface topological features along with vegetation patch structure get changed.

The various hazardous effects which are the result of environmental degradation are as follows:

Hence, we can say, it is a major cause of concern to human life on earth and can be handled by water and energy conservation, and using recycled entities, etc.