A firewall in computer is a network security device that protects your device from the external network. Let us understand this with the help of a real-life example. You might have seen that before anyone check-in to the airport they are thoroughly checked to ensure that they do not carry anything that is prohibited at the airport premises. This is to ensure the security of the crowd present at the airport and even of the airplane that has to take off.

Similarly, the firewall filters out all the unwanted traffic coming from the external network. In this context, we will explore firewalls in detail, we will try to understand how it works, how many types of firewalls are there, and many interesting facts about firewall.

A firewall is a network security device that filters out the incoming and outgoing traffic coming to and from your device. It restricts unwanted access to the private data present in your computer by blocking some specific traffic that violates a set of defined security rules.

A firewall is installed between the internal network and the external network i.e., the internet. The main objective of a firewall is to create the first line of defense by restricting malicious traffic and allowing non-threatening traffic in order to protect your computer from external attacks.

A firewall could either be hardware, software, or an implementation of both.

How Does a Firewall Work?

Now we know that we require a firewall to protect our devices from malicious traffic. Let us try to understand how it works. For that, we need to understand the structure of the web-Based network. 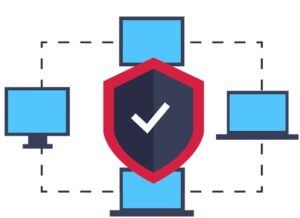 We can classify a web-based network into the:

External Network: It is the global/public network that we refer to as the internet.

Internal Network: It is a private network that can be a home network, corporate intranet, and other closed networks.

The software firewall is a logical implementation of a firewall and functions through the ports and applications.

With the evolving technology, nowadays firewalls can be implemented with the cloud as Firewall as a Service (FaaS).

We can differentiate firewalls on the basis of their structure, their functionalities, the size of the network they secure, and the level of security they provide.

The packets that don’t get validated against the set of rules are discarded and are not allowed to enter the network. The drawback of a packet-filtering firewall is that it only checks the attributes of the packet header only. It never verifies the data/payload of the packet. What if the data inside the packet is malicious? That’s why this is not the ideal firewall for every network.

Proxy service firewall is also referred application-level gateway. It is considered more secure than a packet-filtering firewall. Let’s see why?

In this scenario, both the web server and client feel that they are directly communicating with each other and there is no firewall.

But there is a firewall that acts as a proxy server for the client. It validates both requests and responses.

Advantages and Disadvantages of Firewall in Computer

So we can conclude that a firewall in computer can keep your network ad connected devices safe from malware if deployed and maintained properly.