Flow control in the data link layer is a technique that controls the rate of data transmission between the sender and receiver. If the sender is on a fast and powerful computer as compared to the receiver then the receiver may get overwhelmed by the frames transmitted by the sender.

In such a scenario even if there is no error in the transmission of the frame the receiver may lose some of the frames as it is unable to process the frame with the speed at which the sender is transmitting the frame.

In the rate-based flow control approach, the receiver does provide any feedback to the sender instead a limit is put on the rate at which the sender can send the packet.

Here a sender sends one data packet to the receiver and waits until it is acknowledged. The sender does not send the next packet until it receives an acknowledgement for the previously sent packet. Doing this, the protocol manages the flow control as the receiver will not be overwhelmed by the data packets.

When a sender sends a data packet to the receiver it starts the timer for the corresponding packet. If the sender does not receive the acknowledgement before the timer expires it resents that data packet.

In stop and wait protocol a checksum is added to each data packet which is verified at the receiver end. If the packet is found corrupted no acknowledgement is sent for the corresponding packet. This let the timer expire and the sender resends that data packet. This is how stop-and-wait controls error.

Meanwhile, the receiver starts sending the acknowledgement and the sender window slides by one or more slots covering the frames that can be sent next and leaving the one that is acknowledged.

The selective repeat overcomes the inefficiency of the go-back-n protocol. In go-back-n, if the sender does not receive acknowledgement it retransmits all the frames from the current sender sliding window. But what if there is a frequent loss of frames or if there is a lot of error in the frame a lot of bandwidth is wasted. 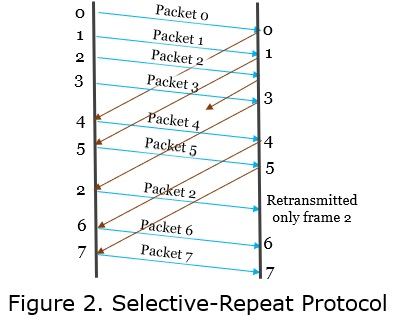 In selective repeat, only that frame is resent of which sender doesn’t receive the acknowledgement before the corresponding timer expires. So the selective repeat protocol is more efficient as compared to go-back-n.

So this is how data link manages flow and error control while sender and receiver are communicating.