Five basic functional units of a computer are i.e. input unit, a processing unit (Arithmetic and logic), a memory to store final or intermediate results, a controlling unit that coordinates functions of every unit, and finally an output unit. In this article, we will discuss all the functional units of the computer.

The functional units of a computer i.e. input unit, arithmetic and logic unit, memory, control unit, output unit all are connected with the interconnection network that helps them in exchanging the information as you can see in the image below. Now, let us explore each functional unit separately. 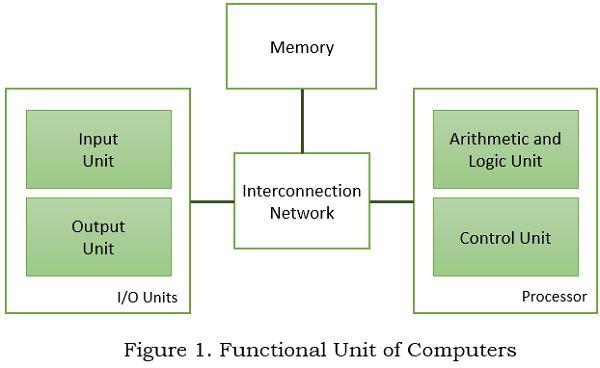 The input to the computer is either a data or instruction, that guides the arithmetic and logic unit about what operations have to be performed and also controls the movement of data between the computer and its I/O devices.

Now, the input i.e. data or instruction are accepted with the help of input units such as a keyboard, mouse, touchpad, joystick, and trackball. The most familiar device that we use to accept input is the ‘keyboard’ and ‘mouse’. All of these input devices are graphic input devices and you can see their effect on the display unit.

Whenever you strike any key on the keyboard it gets converts to the binary code and is handed over to the processor which would interpret the code and perform the appropriate action.

For audio and video input, microphones and cameras are used respectively. Now a day, the internet can also be used to issue an input to a computer from other computers or databases.

A memory unit is required to store the programs that have the set of instructions that instructs Arithmetic and logic unit which operation has to be performed. It also stores the data associated with the program. The memory can further be classified into three types:

The ALU unit performs the operations present in the instruction and stores the result into the memory. It also stores the intermediate results of the operation in the registers.

The arithmetic operation is performed on the operands. The operands are placed into the registers which store one word at a time which is sufficient for an operand. Retrieval of the data form registers is even faster than the cache memory.

A computer is a functional unit and as it has an input unit to accept the input it also has the output unit to provide the generated output by the system. The most familiar device used to output a result is a printer.

The functions of input, ALU, memory, and output unit must be coordinated so that everything goes in sequence i.e. the processor accepts input, place it in memory, processes the stored input, and generates output. This entire sequence is coordinate by the control unit.

2 thoughts on “Functional Units of Computer”