What is Geothermal Energy?

Geothermal is a Greek word that is formed by the combination of two individual words that are Geo and Thermal. The term ‘geo’ corresponds to earth while ‘thermal’ is associated with heat. Thus, one can define geothermal energy as the heat which exists within the earth.

Geothermal Energy is a renewable source of energy. A renewable energy source corresponds to such an energy that is naturally obtained and exists in plentiful amounts thus, easily replenished.

We all are aware of the fact that energy is something that provides power in any of the forms like heat, electricity, etc. It exists in enormous amounts and is lasting for several millions of years in nature.

Basically, there is a huge amount of energy that lies in the interior region of the earth and this energy can be in the form of hot springs, geysers, or volcanoes.
This energy that exists in the core of the earth is regarded as geothermal energy.

The reason behind its renewable nature is that water is timely provided to the ground regions of the earth through rainfall and this leads to continuous generation of heat inside the earth.

Some of the major applications of geothermal energy are that it helps in producing electricity, greenhouse operations, heating buildings, etc.

It is known that this energy is generated nearly about 4000 miles under the earth’s surface i.e., in the core of the earth. Below given the pictorial representation of the earth’s interior: 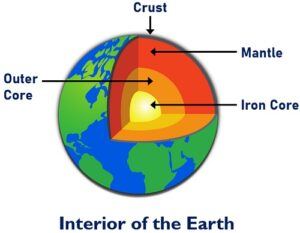 The outermost region, which is nothing but the ground region of the surface of the earth is known as the crust. Its thickness varies from 5 miles to 35 miles depending on whether it is present in the continents or oceanic floors respectively.

One should note here that the crust region is not a plane surface but rather is composed of broken pieces known as plates. Below the plates of the crust, there is magma, and volcano eruption takes place over here. So, at the time when lava erupts then in that there is some part of magma, and the deeper the region, the higher will be the temperature.

Other than the crust, there is another important region which is the core and mainly there are two layers that constitute the core. These two layers are the solid iron core (i.e., the inner core) and the magma which is present outside it formed of hot melted rock. In the interior of the earth, there exists the mantle region of thickness 1800 miles that exist outside the core. Magma and rock are the components of this layer.

There are two major constituents of geothermal power plants that are water and heat. And the reason behind this is that this power plant makes use of hydrothermal resources.

The geothermal power plant operates at high temperature that ranges between 300 to 700° Fahrenheit. Dry steam or hot water wells are used for this purpose and to achieve this, wells are drilled into the earth, and steam or hot water is piped within the surface. The depth of these wells is generally 1 to 2 miles.

One of the surveys has provided the information that the United States tops among all the countries in the world regarding the highest generation of geothermal electricity.

Let us now see what are the basic types of geothermal power plants.

1. Dry steam plants: In such plants, hydrothermal fluids i.e., the steam pipe is taken from a geothermal reservoir and provided to generator turbines. The steam drives the generator that resultantly generates electricity. Once the condensation of steam takes place then its reinjection into the reservoir is done.

Dry steam geothermal power plants are the oldest technology and were first used in the year 1904 in Lardarello, Italy. Presently northern California uses this steam technology.

2. Flash Steam Plants: These geothermal power plants are very common in operation in today’s time. Hot water or high-temperature fluids (182° C) is taken from the underground regions and fed to low-pressure tanks on the earth’s surface under high-pressure conditions. The change in the pressure condition of the fluid leads to the condensation of fluid into vapor or flash which further drives the turbine thereby driving the generator.

If any residual flash is left in the tank, then it is reutilized in order to extract more energy.

3. Binary Cycle Power Plant: In this type of geothermal power plant even low-temperature geothermal resources can be used. This facilitates the production of geothermal electricity at more locations.

This geothermal power plant functions in such a way that here geothermal fluid is made to pass through a heat exchanger unit where binary or secondary fluid exists. The boiling point of the binary fluid is lower than water and so when heat transfer from the geothermal fluid to water takes place then even at moderate temperatures water changes to vapor. This vapor further drives the turbine thereby spinning the generator and producing electricity.

This is quite a different technique from the above two discussed recently in way that here the reservoir fluid does not maintain direct contact with the power plants turbine unit.

We can conclude that from the applications point of view we see then, geothermal energy is used by people at their homes in order to generate electricity. Here, deep well are dug and water is pumped under the heated ground. In this way, using the surface of the earth, buildings can be heated.