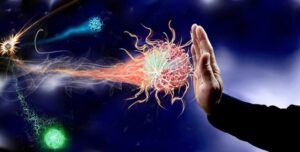 In general, the natural protection provided by the body against certain illnesses or diseases is known as the word ‘immune‘. So, a complex network of cells that work to protect one’s body from infectious diseases and foreign invaders that may harm the body is known as the immune system.

The immune system is made up of specialized cells, tissues and organs, stretched all over the body. Such cells are able to recognize and distinguish the self and non-self tissues (antigen), and even the dead and damaged cells are also checked by the immune system and are been destroyed.

Development of the Immune Cells

Basically, all the immune cells arise from the bone marrow and then mature or develop in different parts of the body as per the requirement. It is the soft tissue found inside the bone and is basically known for the production of red blood cells, white blood cells, and platelets.

There are few main components of the Immune system, which are

The crucial role of these cells is to continuously check and control the entry of any kind of foreign particle that enters the body. WBC moves along with the blood and keeps on analyzing the entry of microbes like fungi, bacteria, viruses, or any parasites and if found, these cells immediately take action against it by destroying them (foreign invaders) quickly and completely.

WBC also produces the memory cells, that are able to recognize the entry of the same microbe, and quickly destroy it. Though there are some viruses that mutate themselves very quickly and then attack the body with a new strain, and due to which our immune system is unable to recognize and fails to defend the body and thus we catch a cold or flu.

Spleen is known to make the lymphocytes and antibodies, that fight against the infection-causing components. It (spleen) plays a crucial role in the removal of the damaged red blood cells and the harmful microbes, and that’s the reason for the spleen to be called a ‘blood-filtering organ’. It is located behind the stomach.

In response to the foreign antigen, the immune system produces a kind of protein, i.e. ‘immunoglobulin or antibody. Their main function is to recognize the chemical or antigen present on the surface of the microbe and mark it as a foreign particle or toxin and harmful material. Further action is taken against such microbe or foreign particles by destroying them through many other particles of the immune system.

Bone marrow is found inside the bones, these are spongy tissues that have stem cells that give birth to a variety of cells. These cells include the innate immune cells like basophils, neutrophils, eosinophils, monocytes, mast cells, dendritic cells, and macrophages. The common lymphoid progenitor stem cells also produce the adaptive immune cells – B, T, and Natural killer (NK) cells. Bone marrow also produces red blood cells.

This gland is located in the upper chest and is known as the place where T cells get mature. It also regulates and filters blood content.

This system enhances or complements the work done by antibodies, the components present in this system are the proteins.

The network of tissues and vessels spread throughout the body. The lymphatic system consists of lymphoid organs (lymph nodes), lymph, white blood cells (lymphocytes), and extracellular fluid. The few significant roles played by the lymphatic systems are – it checks the products produced by the cell, that may not harm the body in any way leading to disorders or any disease, it also deals with the cancer cells, responds to foreign invaders, maintains the fluid level of the body.

The lymphatic system also connects the bloodstreams to tissues and carries immune cells throughout the body.

Other protective or defensive systems present in the body

Apart from the immune system components, there are certainly other ways through which our body gets protection against the microbes, these are skin, hairs, digestive system, excretory systems, urinary tract, lungs, saliva, tears, some enzymes.

Working of the Immune Response

The immune system is very ubiquitous and complex, it has the ability to differentiate between self and non-self. This is done by recognizing the proteins present on the surface of the cell. The immune response against any pathogen is performed by numerous cells that travel to different parts of the body through the circulatory system or reside at a specific place.

As we discussed above different immune cells have different roles to perform with the aim of making the body healthy and disease-free. These cells perform their task by synchronizing with each other and therefore destroying the foreign particles.

The immune system also keeps the record of the pathogen or foreign invaders it has ever come across, and this is done by ‘memory cells’. These cells are the type of white blood cells that quickly identify the microbe if it attacks the body and so the body’s defence mechanism can take action much faster and destroy the microbe before it harms the body.