What is Imperfect Competition?

Imperfect Competition can be described as a practical market setting where the individual sellers can influence the price of the offerings. However, it does not imply that they have full-fledged control over the prices and the absence of rivals, but the control is possible up to a certain extent.

Further, the extent of control over the price varies from one industry to another. That is why imperfectly competitive firms are regarded as ‘price makers.

Joan Violet Robinson – a British Economist, was the first person to explain this concept.

Such a market is characterised by:

Imperfect competition often results in a rise in the prices above the cost, and consumer purchases decrease below the efficient level, as there is no compulsion on the firm to produce the output at the lowest average cost. And in this way, they have a certain degree of control over the price and supply of the offerings. 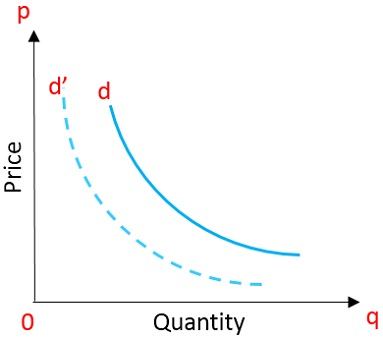 As you can see in the figure, the demand curve slopes downward as the price increases, leading to a decrease in sales. And except when it is the only monopolist, if the prices of rivals are slashed, it will considerably shift its own demand curve from d’ to d.

Further, it also reflects that when an imperfectly competitive firm increases its sales. Resultantly, there will be a reduction in the market price of the commodity as it moves down its demand curve.

At present, the maximum markets for goods and services are imperfect ones.

The imperfect market is classified into four categories, explained as under: 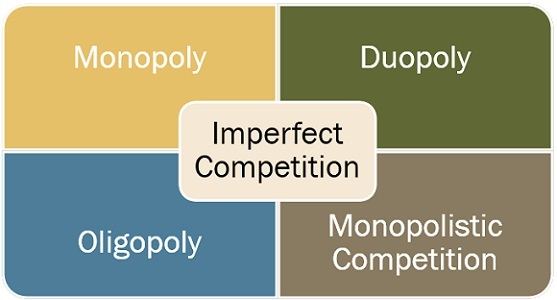 A market scenario in which a sole producer has control over the entire market, as the producer offer such a product with no similar or close substitutes. Monopoly is an example of extreme imperfection.

A market setting in which two monopolists share their power of monopoly is Duopoly. In other words, in a duopoly, there are two sellers for the product. It can be:

A form of imperfect competition in which the number of sellers offering the product (homogeneous or heterogeneous) is few.

The term is of Greek origin which is a combination of two words, “oligoi” and “poly”, which means ‘few’ and ‘control’ respectively. Hence, it refers to a type of market which is controlled by a few firms only. The aviation industry is one of the classic examples of this type of market.

In monopolistic competition, numerous sellers offer dissimilar products for sale to customers. It symbolizes a highly pragmatic situation which exists in the real world. As the number of players is quite large in the industry, each firm enjoys independence.

Therefore, in imperfect competition, the firm experiences a downward-sloping demand curve, which means that a larger quantity of the product can be sold only when it reduces the price of the product.