There are various properly marked horizontal layers of the atmosphere that are divided according to the temperature at different parts of the earth’s atmosphere. Mainly, there are five layers of atmosphere namely:

Before discussing each individual layer of the atmosphere. Let us see

There is a huge blanket of air all over our planet Earth which is called the Atmosphere. The atmosphere is a crucial part of the earth that makes life possible here. The air that we breathe for our survival is provided by the atmosphere. Not only this, the atmospheric blanket protects the living organisms from harmful radiations coming from the sun.

The various layers that constitute the atmosphere is referred to as the structure of the atmosphere. One must note here that the lowermost layer exists exactly after the surface of the earth whereas the uppermost layer provides a transition into the space. 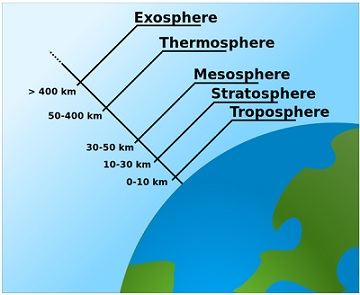 It is the lowermost layer of the atmosphere which is closest to the surface of the earth. This layer possesses an average height of around 13km and contains the air that is used for breathing. The troposphere is responsible for various weather phenomena such as rainfall, fog, precipitation, thunderstorm, etc. Thus sometimes called the weather layer of the atmosphere.

The troposphere is composed of 78% nitrogen, 21% oxygen, and 1% other gases that involve carbon dioxide, methane, hydrogen, etc. The temperature of this region is dependent on the concentration of CO2 present in it.

It is known to us that temperature decreases with an increase in height and so the tropospheric region closest to earth is warmer and gets colder at higher altitudes.

The stratosphere exists just above the troposphere and is extended up to the height of 50 km. At this region, clouds and other weather-related phenomenon do not take place thus is ideal for flying planes. This layer possesses high temperature due to a high concentration of ozone gas that acts as a protective gas from harmful UV radiation.

It is a region of low air density where radiations are absorbed in a limited manner thus have a high temperature. When nitrogen gets absorbed in this layer then this leads to catalytic destruction of ozone.

This is the third top layer of the atmosphere considering from the surface of the earth that exists just above the stratosphere. It possesses a height of about 80 km, where the burning of meteorites takes place when comes from space.

It has only 1% of the total atmospheric mass and possesses low pressure that ranges between 0.01 to 1 mb. This layer tries to maintain the weather patterns as well as earth climatic conditions regular. Sprites or Elves which are known to be strange lightning occur in this atmospheric layer.

This is the fourth layer of the atmosphere that possesses an increase in temperature with the increase in altitude. This layer contains an ionospheric region and is extended up 80 to 400 km. The thermosphere finds applications in radio wave transmission.

The air density is low at this region and is sometimes regarded as part of space rather than that of the atmosphere. It blocks of the path of harmful rays like cosmic, gamma, UV, x-rays from penetrating into other layers. It has a composition of nitrogen and oxygen in it.

In radio wave transmission, the radio waves emitted from the surface of the earth gets reflected back to the earth by this particular layer.

This is regarded as the uppermost layer of the atmosphere and is very thin naturally. It is closer to outer space and gases light gases like helium and hydrogen along with traces of oxygen and hydrogen.

Geocorona is the name given to that part of the exosphere that can be visualized from the earth’s surface. At the exosphere least molecular collisions occur.

This layer lacks gravitational force and air density is quite less here. The high-frequency ionized particles reach a region beyond 200km from this which is called the magnetosphere after escaping from the exosphere.

One must note here that the atmosphere acts as a natural protective layer that supports life on earth. The atmosphere provides essential gases to living beings on the earth. However, the increasing air pollution is affecting the healthiness of the atmosphere making it difficult for survival.

The atmosphere also performs the task of keeping the temperature of the earth in required control by absorbing the cosmic rays of the sun so that temperature extremes may not occur.