Skip to content
February 4, 2021January 19, 2023ChemistryNo Comments on Liquid – A State of Matter

What is the Liquid State of Matter?

The liquid is a state of matter which possesses no fixed shape or size but automatically adopts the shape of the vessel in which we pour it. The particles of matter are not present in close proximity to each other, and they have space between them. Thus, they can move freely.

The liquid is something without which we cannot assume our life. It is known to be one of the crucial components for the survival of living organisms. 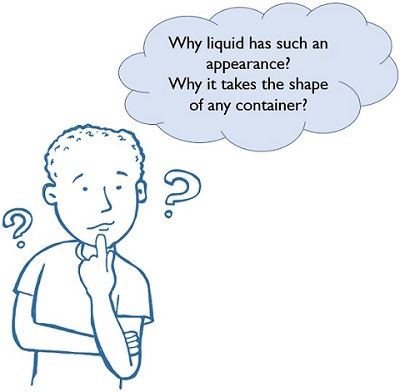 You must be thinking, why it has no specific shape of its own but changes shape when placed inside any container? Soon you will find answers to all such questions.

The matter has three states, namely, solid, liquid and gas. The three different states of matter are distinguished according to the different characteristics possessed by particles constituting the matter.

Any entity in the universe which has some mass within it and is voluminous in nature is matter. More simply, everything that we come across in nature (or in our surrounding) matters as they hold some mass and volume and has its own characteristical properties.

Matter comprises particles, and the characteristics possessed by the particles of matter specifically classify the three states in which matter exists.

What is the liquid state?

One of the states of matter, other than solid and gas, that has no definite shape of its own but takes the shape of the vessel or container in which we keep it, is liquid. The orientation of particles of liquid is such that there exists an adequate space between them that allows the free movement of particles. 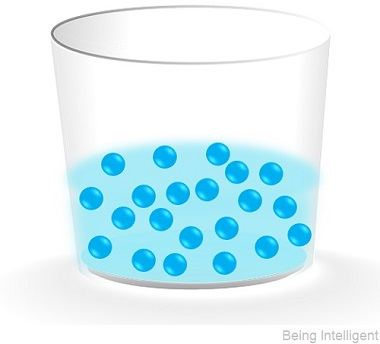 Despite having no definite shape (as it can change shape), liquid possesses fixed volume, are not rigid and can flow. Hence sometimes called fluid.

You must note here that all three states can be diffused into liquids. Liquids offer a higher diffusion rate than solids due to the fact that they have adequate space between their particles. Hence offers easy diffusion.

Hence, the characteristic properties of liquid show dependency on the nature and the magnitude of forces existing between the molecules.

Energy of Molecules in Liquid

Each molecule that forms liquid has some specific energy due to which they move and flow, which causes bumping of them into each other. At the time of bumping of one molecule into another, energy from one is transferred to the other. This happens with all the molecules of the liquid. Due to this, all the molecules of the liquid have a certain amount of energy. But it is not necessary that all must have the same amount of energy.

What is the temperature of the liquid?

But, when the temperature becomes high, so the increased kinetic energy of the molecules leads to overcoming the intermolecular forces that keep the molecules in the liquid state. So, resultantly the molecules moving at high speed evaporates. Further, the matter leads to a change the state from liquid to gas.