The created program and its relevant data are usually stored in secondary memory (your system’s hard drive). But the processor cannot directly access the secondary memory. Thus, the program and its relevant data are first copied to the main memory to execute a program. Then the processor can directly access the program elements from the main memory.

As main memory is directly connected to the processor, the movement of program elements, i.e. instructions and data, in and out of the processor is very fast.

What is Main Memory Made up of?

Based on the technology implemented, the main memory can be classified into two types:

Now, the capacitor’s natural tendency is to get discharged in some time. So, dynamic Ram must be refreshed periodically to maintain the data stored in the memory cell. This is why it is referred to as dynamic, as the charge on the capacitor leaks away, even if there is a continuous power supply.

Let’s now discuss the structure of dynamic RAM. Well, DRAM is made up of multiple cells. The figure below shows you a single memory cell of DRAM that stores a single bit of data, either 1 or 0, i.e. depending on whether there is a charge on the capacitor. 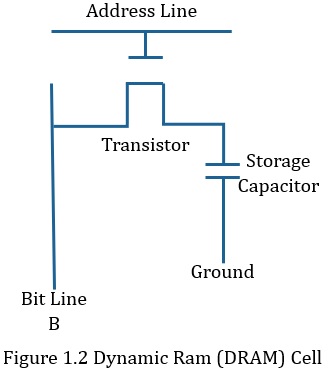 How Read-Write Operation is Performed on the Memory Cell of DRAM?

However, the memory cell of DRAM stores a single bit at a time (either 0 or 1). It is an analog device; thus, the charge value it stores lies within a range. Therefore, the threshold value determines whether the charge is 0 or 1.

Static RAM is a semiconductor memory that uses the same logical elements as used in a processor. It uses traditional flip-flop logic gates to store the binary value 0 or 1 in the memory cell of SRAM. SRAM is a volatile memory, which means it holds data as long as the power supply is on.

The figure below shows the individual cell of static memory. You can notice that the four transistors are cross-connected with each other. In this form, the transistors produce a stable logic state. 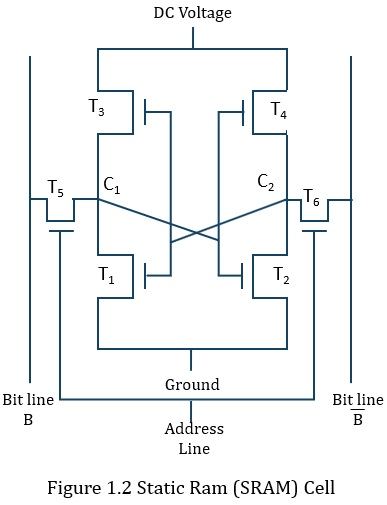 To perform the write operation, bit line B is applied to the desired bit, and the complement of this bit is applied to the bit line. This compels the transistors T1, T2, T3 and T4 to be at the accurate logic state. However, the read operation is performed by reading the bit value at bit line B.

Disadvantages of Main Memory of Computer

Thus, we have discussed the computer’s main memory in detail.