Mechanics is defined as the oldest branch of physical science that describes the study of the effect produced when a body or object (at rest or in motion) is subjected to force. It is mainly concerned with the prediction of physical phenomena. 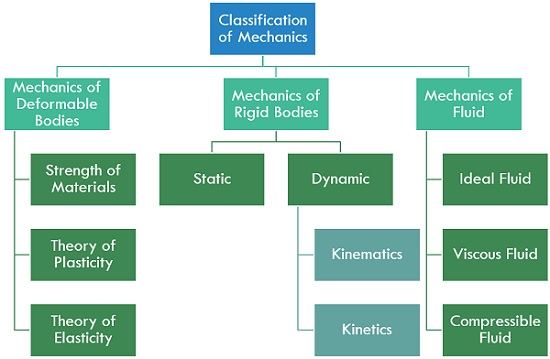 Let us have a brief idea about the mechanics of rigid bodies.

Statics: Static corresponds to something which is immobile or not in motion. This type of mechanics deals with the study of the effect generated when a force acts on a rigid body that is at rest.

Dynamics: Dynamics corresponds to something that changes or in progress. This type of mechanics deals with the study of the effect produced when a force acts on such a rigid body that is mobile or in motion. This means here we study the geometry of motion by considering or not considering the cause of that motion.

Kinematics: Kinematics is defined as the study of the geometry of motion without the consideration of the cause that has produced the motion (mass or force).

Kinetics: Kinetics is defined as the study of the geometry of motion in consideration of the cause (mass and force) due to which the motion is produced.

2. Newton’ Law of Motion: Newton’s proposed three laws of motion which are as follows:

Newton’s First Law: It is associated with the principle of equilibrium of forces and states that a body either at rest or in uniform motion will continue to be in it till the time a force is applied on it.

Newton’s Second Law: This law is concerned with acceleration and is considered to be the basis of analysis performed in dynamics. According to this law, the acceleration of a moving body varies in direct proportion with the applied force to it as well as in the direction of applied force. It is given as:

Newton’s Third Law: According to this law, each individual performed action gives rise to an equal but opposite reaction. Basically, the force that acts on interacting bodies and the force of the reaction is of the same magnitude but in opposite direction.

3. Principle of Transmissibility of Force: According to this principle, the state of rest or uniform motion of the rigid body is maintained if the force applied on a rigid body is transmitted in a way that it acts at any other point on the line of action of the body.

More simply, the nature of force may get changed but the effect generated will not be changed due to the principle of transmissibility of force.

This is all about the basic idea about the field of Mechanics.