The literal meaning of the word ‘memorandum’ or ‘memo’ is ‘a thing to be remembered’. In a legal context, the memorandum is a legal document that records contractual terms. In a business context, a memorandum means any business document which is a written statement of record. The circulation of memos is to draw the attention of the people at work.

In other words, the memorandum is a means to share information at the workplace or say it is a tool of inter-office correspondence. As said earlier, it is a note that is meant to be remembered and acted upon by the company’s executives like managers, supervisors, and other employees.

There are some organizations in which small events and requests are communicated by way of memos.

These are circulated in the enterprise from one office/department to another. In case the organization is operating at a big level, memos are also sent by the head office to their regional centers or branches. Lately, these are sent by way of an email. If the written matter is lengthy, and inappropriate to send via email, then they are printed and sent through the post.

The format of a memo is depicted below: 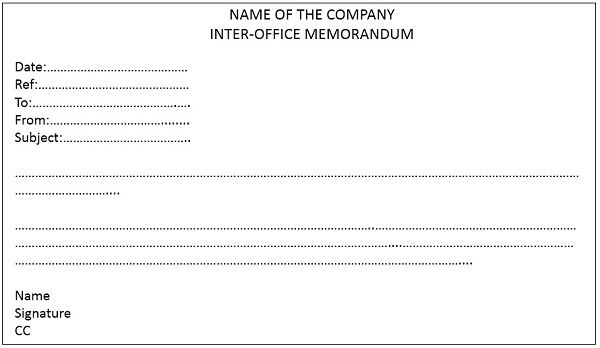 The vital components of a memorandum are:

The purpose of memorandum is to:

While writing a memo it must be kept in mind that business people do not have much time to read lengthy messages. So, they want instant information. So, these pointers should be considered while writing a memorandum: 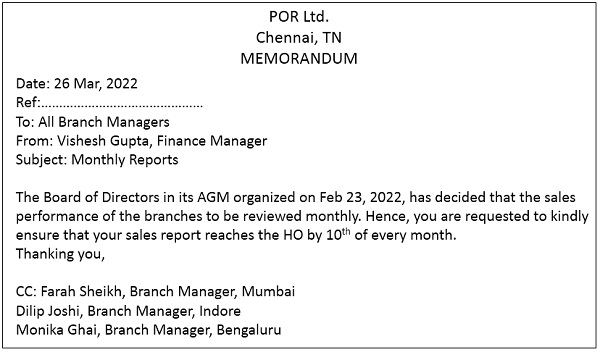 Business memos allow the members to communicate easily and conveniently. It is both an efficient and effective means of communication. At an intra-level in an organization, memos are commonly preferred to letters.