Skip to content
June 23, 2021August 8, 2021Education, EnglishNo Comments on Noun and its Types

A noun is defined as the name for any place, person or object. It is derived from a Latin word ‘nomen’ that corresponds to ‘a name’. It is known to be one of the most important parts of speech.

For a sentence necessarily 2 words are required, one is Noun and the other is Verb.

Consider a sentence as an example to understand the same.

You must note a point over here that both noun and verb are equally important in a sentence. 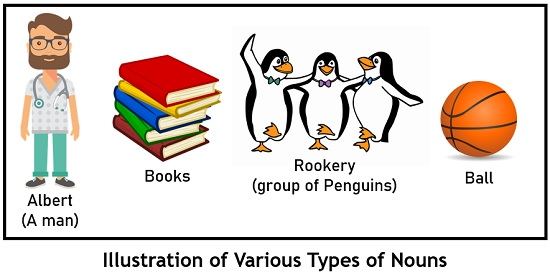 1. Common Noun: It is a type of noun that is used to denote any or every person or thing that belongs to a common class. This means common nouns are not a specific name for a person or object.

Common nouns are written with first letter capital only when they are present at the beginning of a sentence.

2. Proper Noun: A type of noun that describes the name of a specific individual of a class of noun is known as a proper noun.

Proper nouns are always written with first letter capital no matter where they appear in a sentence.

3. Collective Noun: This category of noun denotes the ones that are formed by a collection of various sorts of things or people of the same kind (identical individuals). And the group of things is given a single name that we called collective noun.

Here the team is used to denote a collection of various people that are grouped to do a certain task as a whole like a football team. This means various players are forming a single team. Similarly, the crowd corresponds to a large number of persons, gathered together.

Collective nouns are also known as nouns of multitude.

You must note here that in new grammar common noun and collective noun is regarded as countable nouns. As both can be counted.

4. Material Noun: The name of the material matter or substance or component through which a thing or object is made is known as a material noun.

Here, materials like steel, rubber, glass are used to make a hand watch.

5. Abstract Noun: Abstract nouns are a class of nouns that are used to specify the qualities, concepts of objects. Thus, abstract nouns define attribute or quality. One of the characteristics of an abstract noun is that they cannot be seen or touched.

6. Concrete Noun: This kind of noun is noted as the object or thing that exhibits the desired attribute (quality). Concrete nouns can be sensed, touched, felt, etc.

We can touch salt and even after tasting, we can say it is salty or is white in colour. So, sugar is a concrete noun whose salty taste and whiteness are the attribute nouns.

You must note here that both material and abstract noun are of uncountable nature.

Thus, from this discussion, it can be concluded that nouns are the ones that are defined on the basis of the name given to anything, that can be living like human, animal, etc. or non-living like a pen, bottle, books, etc. It is be feeling like hatred, love, etc. or behaviour like whiteness, solidity, etc.