What is Nuclear Force?

A force that binds nucleons (a combination of protons and electrically neutral particles, i.e., neutrons) together within the nucleus is the Nuclear Force. It is one of the fundamental forces of nature, like gravitational and electromagnetic forces.

The alternative term for nuclear force is Strong Force.

A nucleus is composed of neutrons and protons. The charge of protons corresponds to the positive charge in the nucleus. In the earlier theories, it was proposed that a nucleus may have some electrons along with protons and neutrons. However, when based on the arguments proposed by quantum theory. The presence of electrons in the nucleus of the atom was ruled out as all electrons are present outside the nucleus.

Basically, the atomic number of an atom corresponds to the number of electrons existing outside the nucleus of the atom.

You must note there that an atom is neutral. Thus, if the atomic number is denoted by Z, so -Ze represents the total charge of atomic electrons while +Ze is the charge of the nucleus due to protons.

The combination of protons along with neutrons results in atomic nuclei. However, there is an exception where the hydrogen nucleus has only a single proton.

You must note here that there is the same number of protons present in every nucleus of a chemical element.

A neutron is a neutral subatomic particle present in every atomic nucleus. But the exception is hydrogen because its nucleus has only protons. It is an uncharged particle and symbolized as n.

Despite their neutral behaviour, neutron acts as an important research tool, as the structure of a general matter can be easily understood with the help of idea about the properties and structure of the neutrons.

A free-electron, i.e., the one which is not bounded within the nucleus, results in beta decay which is a type of radioactive decay.

We know that neutrons and protons constitute the nucleus. As protons possess a positive charge, protons show repulsion towards each other due to Coulomb’s Law. Thus, to bind the nucleus together, a strong, attractive force is required. This binding force must be strong enough so that it can overcome the repulsion existing between positively charged particles, i.e., protons. This facilitates the binding of the protons and neutrons together into a small nuclear volume. 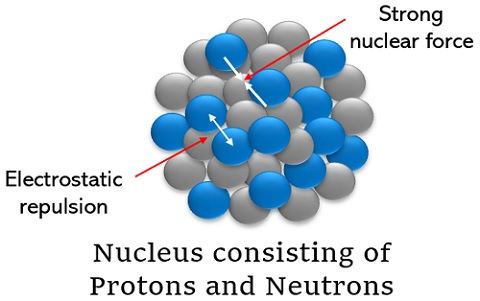 The nuclear force is attractive in nature, and this powerful, attractive force exists at around 1 femtometer distance.

As we know that bringing the charged protons together against the electric repulsion existing between them requires energy. So, when the nuclear force binds protons and neutrons together, then this energy is stored and is used in nuclear power and nuclear weapons.

You must note here that there exists no simple mathematical formula for a nuclear force as we have in the case of Coulomb’s law or Newton’s law of Gravitation.