What is Ordinary Resolution (OR)?

Ordinary Resolution (OR) can be defined as the resolution passed at the company’s meeting, by a simple majority, i.e. 50% + 1 vote of members present either in person or by proxy (where proxies are permitted).

In this resolution, the votes cast in favour of the resolution should be more than the votes cast against it (including the vote cast by the Chairman). The votes cast is irrespective of the mode, i.e. whether on a show of hands, electronically or poll or postal ballot or any other prescribed method), as the case may be.

Here, the votes of any those members are counted who are ‘entitled and voting’. Meaning that those who are abstained from the voting process, or who are not permitted to vote, their votes will not be taken into consideration.

Further, a seven days clear notice is to be given to the members who are entitled to attend and vote at the meeting.

The business matters which are to be transacted at the Annual General Meeting (AGM) are presented as motions. It is in written form and duly signed by the mover, which is then put to discussion and vote by the Chairman.

The motion may undergo certain amendment during the discussion session. As regards amendment, the Chairman has the outright authority to accept or reject the amendment, on different bases, which may include inconsistency, irrelevance, or redundancy.

Finally, when the motion is approved and adopted with the needed majority of the members present, entitled and voting, it turns out as a Resolution. It is nothing but a joint assent on a business matter by the members, which is binding on the company. Minutes of the Meeting acts as the evidence of Resolutions passed.

For a publicly listed company, there are three types of resolution: 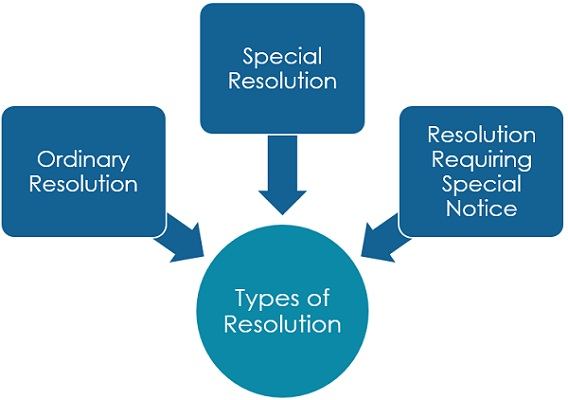 What is a Proxy?

A written instrument executed by a registered shareholder appointing another person to attend and vote at the meeting, on his/her behalf, when he/she is not present. However, the proxy can vote only when the voting is done by-poll. The proxy need not be a member of the company and has no right to speak.

Further, the instrument authorizing the proxy needs to be filed with the company, 48 hours prior to the commencement of the meeting.

The ordinary resolution is passed in order to decide the routine business matters. There are several decisions which require Ordinary Resolution:

Moreover, a notice needs to be served, which can be issued either by the firm or by the member who proposes the resolution.