­­What is Oxygen Cycle?

The oxygen cycle tells us about the way the exchange of oxygen takes place in between various environmental segments such as the atmosphere, lithosphere, hydrosphere, and biosphere. Oxygen is a well-known byproduct of the process of photosynthesis. It is one of the elements that exist in ample amounts on the Earth.

In the atmosphere, its concentration is about 21% in the elemental form.

We all are aware of the fact that oxygen is regarded as one of the crucial elements that support life on earth. Basically, all living organisms need oxygen for respiration. For all living organisms, cell acts as the basic building block which constitutes Glucose.

In order to break down the cellular glucose, oxygen is required. So, living beings inhale oxygen from the atmosphere and are transferred to various cells through blood. When glucose present in the cell combines with oxygen then energy is produced along with carbon dioxide and water.

As the process is taking place in cells thus is called Cellular Respiration. Meanwhile, the carbon dioxide produced over here is not needed thus, it is exhaled by the living organisms.

However, the chemically reactive nature of molecular oxygen makes it toxic for the cells in living bodies. It is due to this reason, the cell exhibits peroxisomes i.e., cellular organelles as a protection from the toxic effects of molecular oxygen.

Basically, oxygen is present in combined form in the Earth’s crust along with the air in the form of carbon dioxide. In the earth’s crust, it exists as oxides of metals and silicon along with carbonate, sulphate, nitrate, and other minerals.

Not only this, oxygen is known to be a crucial component in various biological molecules i.e., major food components such as carbohydrates, proteins, etc.

In the environment associated with land, oxygen is abundantly present. However, its scarcity increases at high altitudes or at a very low level in the ground. The aquatic animals survive due to the dissolved oxygen in the water.

It is to be noted here that the concentration of dissolved oxygen depends on the temperature as well as the depth of water. This can be better understood in a way that – the higher the temperature of the water, the lower will be its capacity to dissolve water and vice-versa.

Oxygen Cycle is one of the BioGeo Chemical Cycles that is responsible for maintaining the concentration of oxygen in the atmosphere.

Mainly there are three processes where the use of oxygen is highly considerable, these are as follows:

The figure below represents the oxygen cycle: 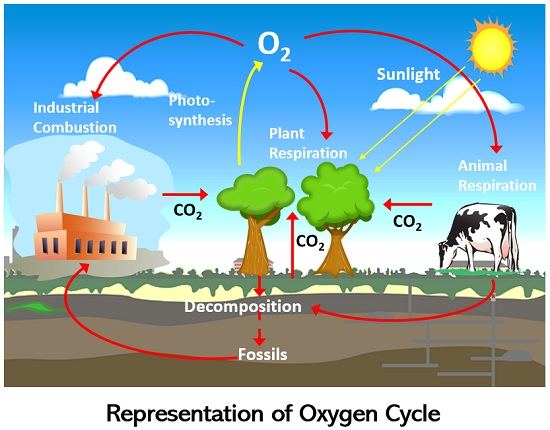 It is known to us that oxygen is responsible for sustaining life on Earth. Human beings along with animals and plants require oxygen so as to perform aerobic respiration or oxidation of organic food that is responsible for sustaining growth and basic metabolic activities.
It is due to this reason, oxygen is absorbed at the time of aerobic respiration and is released by plants at the time of photosynthesis and this gives and takes a cycle of oxygen in the environment that sets up the oxygen cycle.

In our atmosphere, oxygen exists in the form of ozone, water vapor, pure oxygen, and carbon dioxide. The process of photosynthesis is performed by plants for the removal of carbon dioxide from the atmosphere and the addition of oxygen. Before proceeding, let us have a brief idea about-

A process utilized by green plants where environmental carbon dioxide is converted into glucose and oxygen under the presence of sunlight using the green component of leaves (i.e., chlorophyll) is known as photosynthesis. Basically, the process is regarded as the one by which plants make their food as the produced glucose is provided to the fruits and other edible parts.

We have already discussed cellular respiration in the previous section. Now, talking about combustion, combustion is basically defined as the chemical reaction where an element is burnt in the presence of oxygen.

However, photosynthesis is the only process that provides oxygen to the atmosphere. Thus, we can simply say that plants are the source of oxygen in our environment thus are a very crucial part of our life.

It is due to this reason there is a well-known fact that one cannot imagine life on earth without plants.

One should note here that the overall constituent of oxygen in the biosphere is constant and therefore, there is a stable oxygen cycle. It is true that maximal processes on earth occur in the presence of oxygen.