A parallel computer is a kind of computer structure where a large complex problem is broken into multiple small problems which are then executed simultaneously by several processors. We often consider this as parallel processing.

When it comes to the structure of parallel computers it can be characterized with the help of features such as pipeline computers, array processors, multiprocessor systems.

Pipeline computers leverage parallel computing by overlapping the execution of one process with another process. If we consider executing a small program that has a set of instructions then we can categorize the execution of the entire program in four steps that must be repeated continuously till the last instruction in the program gets executed.

The figure below shows that to execute three instructions completely it takes 12 secs. 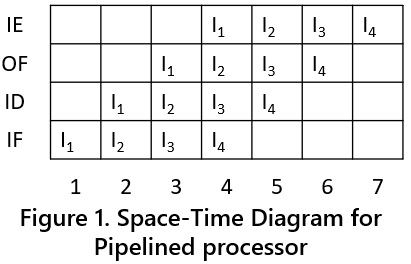 Pipeline computer synchronizes operations of all stages under a common clock. Hence, we can say that executing instructions in pipelined fashion is more efficient.

Now consider that if we replicate the ALUs and all ALUs are working in parallel then we can say that we have achieved spatial parallelism. Array processors are also capable of processing array elements.

In the figure above, we can see that we have multiple ALUs which are connected in parallel with the control unit using a data routing network. Each ALU in the system i.e., processing elements consists of the processor and local memory. The pattern in which the processing elements are interconnected depends on the specific computation to be performed by the control unit.

So far, we have discussed three structures of the parallel computer that has a centralized computing system where all the hardware and software are implemented in the same computing center.