Personality is the way a person reacts and interacts with other individuals and the environment. Hence, it is the organized behaviour of a person, in which a person reacts to the given stimulus in a defined manner.

Further, for some people, personality means charm, attractiveness and dress, while for others, it refers to the way one responds to life situations.

There are four different factors or determinants which influences one’s personality: 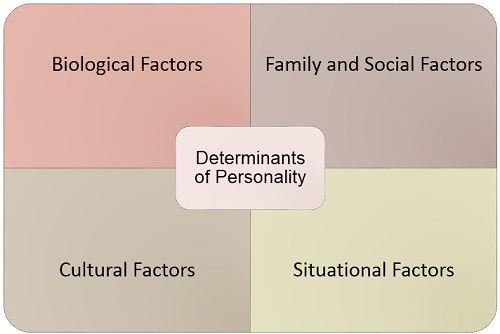 Heredity: The factors which are determined at the conception stage comes under the head heredity. Hence, when the qualities of parents are transmitted to the children, i.e. from ancestors to descendants, by way of biological mechanisms or genes lying in the chromosomes of the germ cells. It may include muscle composition, temperament, physical stature, facial features, etc.

Many psychologists and geneticists have confirmed that heredity plays a significant role in determining one’s personality.

Physical Features: The physical features of a person greatly affects the personality of a person and has the capability to influence others. It includes physical characteristics and the rate of maturation. Physical characteristics include height, weight, colour, complexion, etc. can influence others. Further, the rate of maturation also affects personality, i.e. persons of different maturity are exposed to various physical and social situations.

It is a truth that an infant acquires most of his/her personality traits and pattern of behaviour from his family or community to which he/she belongs, which are not just customary but acceptable also. Hence, parents, siblings, classmates, coworkers, neighbours, friends, etc have a very strong impact on the personality development of a child. Further, these shape the personality through the process of socialization and identification.

Socialization: The socialization process refers to the process that helps an infant acquire such behavioural patterns which are common and acceptable to the standards of his family and social group to which he comes from.

These are open to the child since his/her birth. The process starts with the initial contact between the mother and baby. After that, the infant comes into contact with other family members and social groups like school friends, peers etc. who also take part in this process and so the process is not limited to childhood only but is a lifelong process.

Identification: This process begins when the person makes an attempt to identify himself with someone whom he considers as an ideal, who is usually a family member. In general, a child tries to behave either of the parents and imitates their actions. It is examined from three different perspectives:

Culture is one of the primary determinants of an individual’s personality. It can be defined as the set of beliefs, values and techniques of dealings with the situations, which are shared and transferred from one generation to another.

It mainly identifies – what an individual is and what he/she will learn. And so, the culture within which he/she is born and brought up plays an important role. Both conformity and acceptance are needed from the members.

For example, A person belonging to Japanese culture possesses cooperation and team spirit. Here one must note that there is no direct relationship between personality and culture and so persons belonging to the same culture can have different personalities and behaviour.

For example, A person can behave differently while going on a trip with his friends and while facing an interview.

Therefore, with the situation, a person’s behaviour and responses differ. To be precise, how a person behaves is not determined by what kind of a person he is but it hinges on what the situation is. But one cannot say the impact of different types of situations on the individual’s personality.

In a nutshell, personality can be understood as the characteristics of the person that makes him/her unique and also moulds the behaviour. It is something that has an impact on perception, learning, motivation and other psychological processes.