When green plants and certain other organisms (bacteria, algae, and protistans) convert light energy into chemical energy is known as Photosynthesis. In this process the most important source of light – sunlight is captured by the green plants, and along with the use of carbon dioxide, water, and minerals it gets converted into oxygen and other organic compounds.

Likewise, the humans and other living beings that take in oxygen and give out carbon dioxide, have ever wondered that where does this life-supporting gas (oxygen) comes from? It is impossible to imagine the maintenance of life on this planet by overestimating the importance of photosynthesis.

If this process stops or slows down, there will be depletion of oxygen, reduction in the availability of food and other raw materials and ultimately sustaining of life would be difficult. Only the organisms that will be able to survive without this are the chemosynthetic bacteria, which are able to use chemical energy and not dependent on the photosynthetic process. 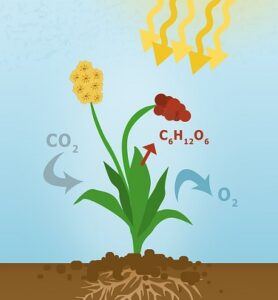 Hereby, we will be discussing the types of photosynthesis and its principle and how it is beneficial to the atmosphere. So, we can simplify by saying that ” by grabbing carbon dioxide (CO2) from the air, water from the soil or roots and energy (light energy) from the sun, plants are able to prepare their own food in the form of glucose (sugar) and oxygen (O2) and this process is known as photosynthesis.

Equation of the Photosynthesis

During oxygenic photosynthesis, light energy is used to transfer electrons from water to carbon dioxide to produce glucose (carbohydrates). In this process, the water (H2O) is ‘oxidized’ or loses electrons while carbon dioxide (CO2) gets ‘reduced’ by receiving electrons, so the resultant product is carbohydrates along with oxygen.

In the anoxygenic process, that takes place in green sulfur bacteria and purple bacteria, oxygen is not produced rather some foul-smelling gases like hydrogen sulfide are released. In this process the donors are other than water, they are especially performed by some aquatic habitats.

The substance that absorbs light is known as a pigment, though the colour of the pigment is known by the light that is not been absorbed and reflected by it through its wavelength. Chlorophyll is the green pigment of the photosynthetic plant cells and absorbs all the wavelength of light except green colour and that is reflected us. The role of pigments is to trap the light or sunlight. The three main pigments of plants are:

In plants, the photosynthesis process is held in the chloroplast,m which is the kind of cell organelle, where it (chloroplast) has the chlorophyll ad known for giving green colour to the plants.