The term “ Photovoltaic ”  is a combination of two words – Photo and Voltaic, where, Photo means light, and voltaic means electricity. PV technology means the hardware that converts sunlight into usable electrical energy. The components of a photovoltaic system include a solar panel, charge controller, DC to AC power inverter, etc. In addition to this, it may have a battery bank with other system hardware which includes wiring, overcurrent protection, surge protection, and other power processing components.

Photovoltaic System and Its Components 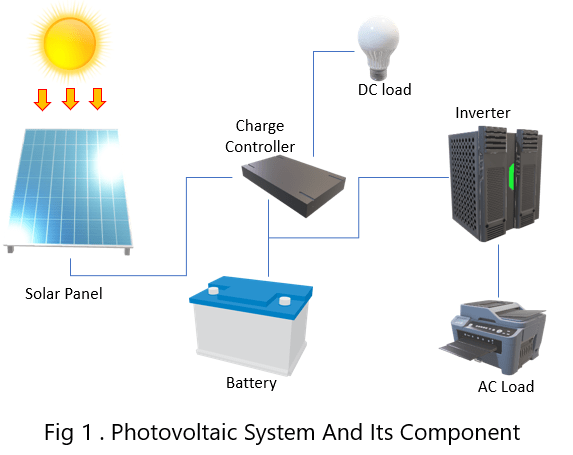 A battery or a battery bank is the most common type of energy storage device used in solar PV systems. It stores the electrical energy generated by the solar cell or module. The energy thus stored in the battery can be used by the electrical load when required. It also makes energy available in rainy/cloudy weather.

The power output from a solar module in DC power. To run AC loads it is important to convert DC power in AC. For this inverter is used. An inverter is an electronic device that converts DC power to AC power. It is placed between batteries and loads.

It is a type of charge controller which prevents the discharge of batteries during low light and during the night.

6. Other Components of Photovoltaic System

So this is all about the photovoltaic system, its technology, and its component.