Process scheduling helps in determining which process should be allotted to CPU and which should be put on hold. It takes care that no process is starving and no process is engaging CPU for a long time keeping the other process on hold.

When a process is ready for execution it is brought to the main memory and placed in the ready queue. When a CPU gets free the first process in ready queue is allotted to CPU for execution.

When a process executing in CPU quits for the reasons like waiting for the occurrence of an event (I/O request to complete). Processes waiting for sharing of I/O devices are placed in the device queue.

Process scheduling would be easier to understand with a standard representation of queuing diagram. You can observe two scheduling queues in the diagram ready queue and device queue.

Resources serving the queues are represented with the circles whereas arrows represent how a process navigates in the system. Now let’s interrogate the diagram. 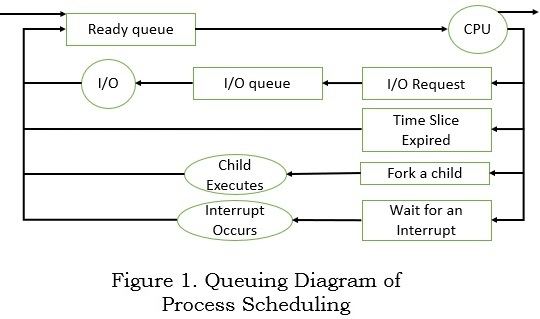 When a process enters main memory for execution it is placed in ready queue till CPU can be allotted to it or it is dispatched.

Now, once CPU is allotted to the process, there are a series of events that can occur to the process we will discuss them one by one.

When a process gets executed completely and is terminated, it is removed from the queuing sequence else it switches between the ready queue and waiting queue.

Scheduling can be classified into two kinds that are discussed below:

As we know whenever the interrupt occurs the CPU has to suspend its current process and run the kernel routine and when its processing is complete it resumes the suspended process. This scenario is context switching.

When CPU suspend its current process it stores the context of the process in PCB. It stores information such as process current state, CPU registers values memory management information.

This information helps CPU identifying at what stage it has left the process when it resumes back the suspended process. Context switching creates overhead for the system as it is not performing any useful work at that moment. The switching speed varies from system to system depending on their memory speed.