What is Public Expenditure?

Public Expenditure, as the name signifies is the expenses that the government of different levels, i.e. central, state or local bodies, incurs either for its own maintenance or for meeting the common needs of the citizens or for promoting economic and social welfare.

For Instance: Expenditure to run government effectively by public authority be it expenditure on administrative purposes or for maintenance of law and order in the area. Moreover, the expenditure made to provide public utility services like education, public recreation, public works, public transportation, defence and so forth are some common examples of public expenditure.

Also, the government carries out multiple social and economic programmes, projects and schemes for which it incurs public expenditure. This may include:

The different types of public expenditure are: 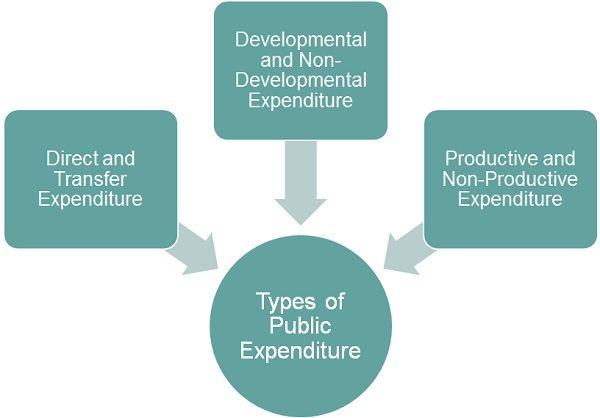 Expenditures in the form of payment without corresponding return are transfer expenditures. This may include payment of interest on government debt, old age pension, sickness benefits etc.

Those expenditures which government incurs on the economic and social development of the nation such as education, health, research, infrastructure, agriculture, transport and communication, etc.

The expenditure that the government incurs on the non-developmental work of the government falls in this category. This may include the supply of essential services like police, defence, administration of justice, interest payments, pension and retirement benefits, etc.

Expenditures to improve the economy’s productive efficiency, i.e. they are just like investments, are productive expenditures. This may include the purchase of physical assets like machinery, factories and human capital like education, training and health.

Causes of Increase in Public Expenditure 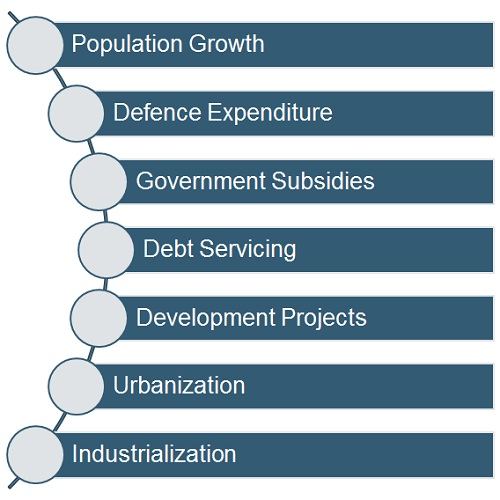 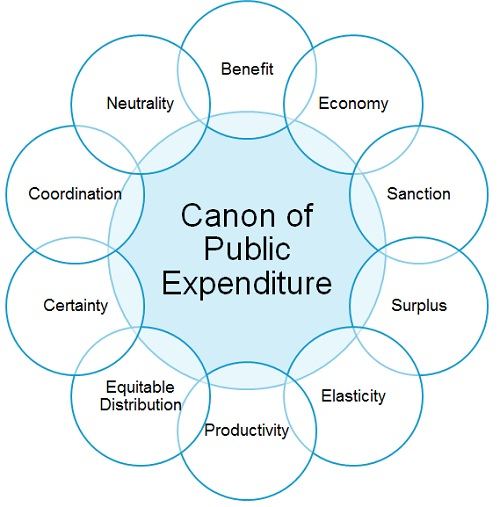 Public Expenditure should be made keeping in mind the maximum benefit of the people, increase production, provide protection against external threats, maintain internal order and reduce the existing inequalities in society. Achievement of these objectives is possible only when the spending is not on an individual but on the entire society.

Incurrence should be economic and careful. Here the term ‘economic’ means there should be no extravagance or wastage of public money. That means public expenditure should be for productive purposes only. Spending of public money should be on very essential items that provide mutual benefits to all.

Prior to the incurrence of public expenditure, sanctioning of the amount by a competent authority takes place. For this purpose, the authorities should follow proper procedures. Needless to say, when the sanction is not authorized by a competent authority, it may result in overspending. Here, one should note that the amount has to be spent for the purposes for which it was actually sanctioned.

Saving is a characteristic of the government too. So, at the time of preparation of budget one should keep in mind the element of surplus. this implies that government should try to avoid a deficit budget, to increase its creditworthiness.

Public Expenditure needs to be elastic. It means officials and public authorities can make necessary changes in it whenever and wherever required. This is because when the public expenditure is rigid

Next, public expenditure should promote the productivity of the nation. Spending of the funds should be in such a way that it encourages capital formation and increases employment opportunities for willing and competent youth.

Equitable Distribution of wealth is one of the major issues which the economies of many countries are facing at present. Public Expenditure should promote equitable distribution of income and wealth between haves and have-nots. This will ensure more benefit to the weaker and poorer sections of society. Alternatively, we call it a canon of equality.

So, we all know that the nature and amount of public expenditure varies from country to country depending on the needs and requirements