What is the Respiratory System?

The organs, tissues, and other parts of the body that contribute to the process of breathing are known as the respiratory system.

Though breathing is said to be a quite simple process where there is the inhalation of the oxygen and exhalation of carbon dioxide. However, if we look at or study in deep about the mechanism of breathing, we will get to know the complexity of getting the purified oxygen and giving out the carbon dioxide from the body.

Following are the segments present in the body that makes the respiratory system complete, these parts may be small in size but play a vital role in breathing, and problem in any one of them may also create issues related to breathing: 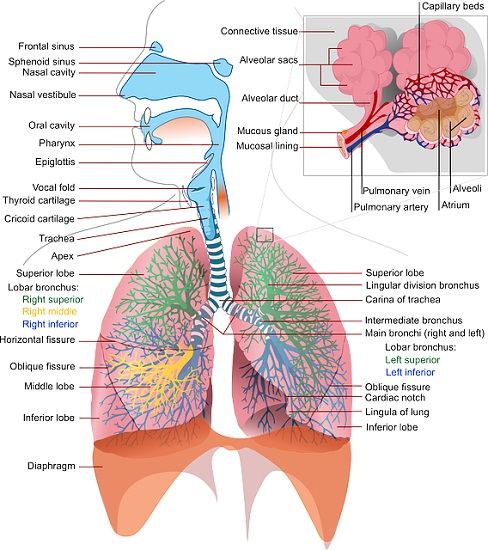 It is connected to the nasal cavity by the small openings, these are actually hollow spaces found in the bones of the head, that regulate the humidity (present in the air while breathing) and temperature and also provide tone to our voice.

It is the common entrance for the air to let in the respiratory system. Our nasal cavity has hairs inside the line of the wall of the cavity, that filter the air we take and try to clean the inhaled air as much as possible before entering it into the system.

The mouth is the second common passage for the entry of the air, is helpful when due to any problem the person is not able to take in air from the nasal cavity or the passages are temporarily blocked.

Adenoids are on the upper region of the throat, there is overgrown lymph tissue. This system supports the body in filtering the foreign particles and harmful microbes and thus provoking the production of the lymphocytes to fight against such harmful particles. Sometimes, it may happen that they (adenoids) may become a hindrance in the breathing process and therefore they are removed.

It is the lymph nodes found in the wall of the pharynx. The lymph system of the body consists of various nodes and vessels that connect and transports the fluid throughout the body. Tonsils may also become sometimes highly infected and if the condition worsens, these are removed by minor surgery.

The throat is the collection point for the inhaled air, after which it is been passed down into the trachea ( windpipe).

It is also known as the voice-box, has the vocal cords that regulate the body’s sound when the air is inhaled and exhaled.

It is a kind of barrier, that safeguards the entrance to the trachea. It is the flap of tissues, and when anything is swallowed it makes sure that it has moved into the stomach and esophagus.

The esophagus is the track or passage that extends from the mouth and throat to the stomach.

Ribs are the bones that protect the chest cavity from external shocks, it is the cage-like structure. They support the contraction and expanding the lungs.

It is the track or passage that extends from the pharynx to the lungs.

These are the membranes that surround the lobes of the right and left lobes of the lungs and separate the chest wall and lungs.

Cilia are very small hairs, showing wave-like motion present in bronchial tubes. Though tine plays a vital role in weaving out the dust, germs, unwanted materials to enter into the respiratory system especially the lungs.

The ciliary motion also carries the phlegm or mucus in the upward direction and out into the throat, where it is swallowed or coughed up. Coughing is the process to come out with the problem of mucus.

It is the wall of muscles, separating the abdominal cavity and chest cavity. Moving downward, the diaphragm also functions in generating suction to let in air and expand the lungs.

These are the smallest section of the bronchi, where they have alveoli at the end. These (Alveoli) are the air sacs, where the inhaled air is destined to go. Attached to the walls of alveoli are the small capillaries of blood vessels.

This is all about Respiratory System