A rheostat is an electronic instrument that is used for the purpose of controlling the electric current which is flowing through a circuit. Thus, it is basically a variable resistor that exhibits controlling action.

The name for this instrument was given by an English scientist Sir Charles Wheatstone.

In any electric circuit whenever there is a need for adjusting the current which is flowing through the circuit then rheostats are used. It is mainly used for changing the resistance of the electric circuit. Generally, the resistive element of this instrument is a metal wire or it can be carbon or a conductive liquid. 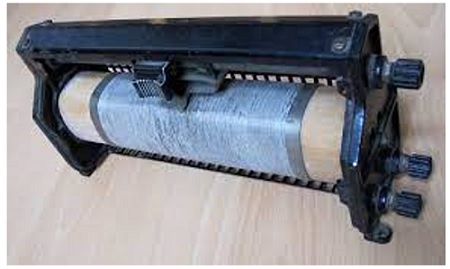 Thus, we can say that rheostats are the variable resistors that are designed to provide resistance to the circuit.

It is known to us that the current which flows through any electric circuit depends on either the amount of supply voltage provided to it or the overall resistance of the electric circuit.

The resistance of the circuit when increased resultantly causes a reduction in the current which is flowing through the circuit. As against, if the resistance is reduced then the flow of current will automatically increase.

Symbolically rheostats are represented as:

As we can see there are two representations, in one there are zigzag lines which are known to be American standard while in another there is the rectangular box which is the international standard.

The operating principle of rheostat is based on Ohm’s law, according to which the current varies in inverse proportion to the resistance for the supplied voltage. This implies that the current decreases if resistance decreases and vice-versa.

A rheostat is known to be a two-terminal device and out of the two one is fixed while the other is mobile.

It is known to us that current and resistance vary in inverse proportion with respect to each other and therefore if the current is required to be decreased then the resistance of the rheostat must be increased. While opposite action is performed whenever there is a need to increase the current through the circuit.

At the time of increasing or decreasing the resistance of rheostat, it is to be kept in mind that it can be increased or decreased up to a certain limit and this depends on the resistance rating of the rheostat.

Suppose there is a rheostat of rating 40 kΩ then the lowest resistance which it can offer is 0 Ω and the highest is 40 kΩ.

It is the fact of basic understanding that the resistance exhibited by any material shows dependency on the length, cross-sectional area along with resistivity of the material which is considered.

Since length varies in direct proportion to the resistance, therefore, if the length is increased then resistance also increases and vice-versa.