What is Semi-Variable Cost?

As it contains a fixed element, below which it is not going to fall, irrespective of the activity level. On the other hand, the variable element in it keeps on changing. The change may be at a constant rate or in lumps. It can be said that this cost is partly influenced by the fluctuations in the activity level.

Moreover, these costs vary in total along with changes in the direct proportion of output. However, due to its variable element, it changes with volume. Also, they change in the same direction of output, but the proportion will be different.

Here we will discuss some common examples of semi-variable costs:

If a telephone connection is there in the office, there is a minimum charge that the firm has to pay every month. And, beyond a certain number of calls, the charges differ depending on the number of calls. Suppose the annual rental is Rs. 500 and for every call made by the firm the charges are Re. 1 per call. So we could say that the annual rental is the fixed part that does not change, but the calls made constitute the variable element that changes according to the usage.

With this example, one can easily understand that no specific pattern is there in the behavior of semi-variable cost. 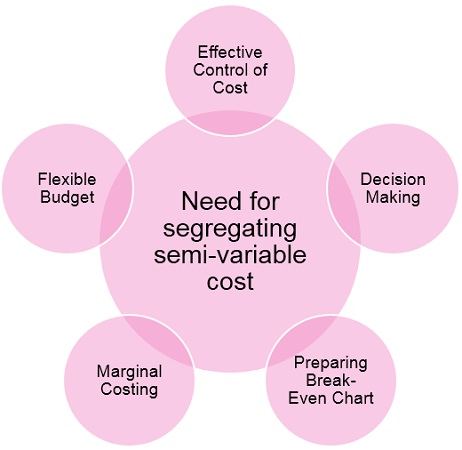 In a nutshell, semi-variable costs are the costs a part of which is fixed up to a certain extent while the other part is variable, i.e. changes with the change in production volume. However, the proportion may be different.