What are Sequential Circuits?

Sequential circuits are a type of logic circuit whose output value depends on the latest inputs as well as on conditional previous inputs. Thus, these are given the name sequential as a series of inputs decide the output.

From the word ‘sequential’ one can easily understand that there is the occurrence of something in sequence i.e., one after the other. Also, the presence of a clock signal in the circuit leads to provide the idea that when the applied input will get changed.

The figure below represents the arrangement of a sequential circuit consisting of the combinational circuit and feedback circuit: 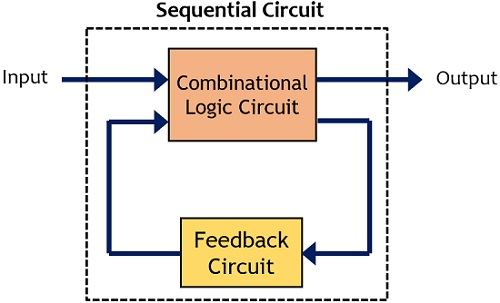 A feedback circuit acts as an interconnection between output and input. Through feedback, a part of the output is fed back to the input. Within the combinational circuit, there is a memory element, used to store the previous states of the system. Generally, flip flops are used as memory elements to store the data.

The presence of feedback sometimes introduces instability in the system.

Therefore, one can say that the obtained output state of the sequential logic circuit is a function of present input, past input along with past output. Basically, the circuits work on these conditions and remain in the current state till the time the clock signal changes the states thereby providing a memory.

In general, the sequential logic circuits hold two states thus are bistable devices where there is output or sets of outputs in one of the two basic states i.e., 0 and 1. It is to be noted here that the circuit remains in the current state until and unless another input trigger pulse is provided that will lead to changes in the bistable state of the circuit once again.

In order to construct bistable circuits, universal NAND or NOR gates can be arranged in a specific combination so as to give rise to sequential circuit.

These types of circuits are mainly used in conditions when the speed with which the task is taking place holds crucial importance. However, their design is quite difficult, and sometimes an uncertain output is obtained.

2. Synchronous Sequential Circuit: The operation of these circuits involves clock signals along with inputs. The duration of the obtained output pulse, in this case, is equivalent to the clock pulse of the sequential circuit.

The speed with which the operation takes place over here is quite slow and the reason is that every time it is needed to wait for the next clock pulse for the next operation to take place. One should note here that the level of the output signal varies when the input pulse begins and remain in that till the next pulse is obtained or the clock signal arrives.