Smog is a word which is obtained from the combination of two words smoke and fog. Smog is a term that refers to a hazy environment that contains solid particulates along with liquid aerosols that somewhat obstruct atmospheric visibility at the partial level. It is basically a type of air pollution and one should not get confused and misinterpret the term as smoke.

The formation of smog is basically the result of the interaction of pollutants with sunlight. The pollutants can be nitrogen oxide, carbon monoxide and various volatile organic compounds which are released from vehicles, industries or burning of fossil fuels.

The air pollution which is seen in urban regions is generally known as Smog. As we have already discussed that smog is a combination of smoke and fog and the reason for the same is that originally it is identified with smoke released from coal fires that mix with low-lying fogs.

Mainly smog is of two types which are as follows:

One should note here that these two types of smogs are named based on the places they were observed first, i.e., London and Los Angeles, respectively.

Let us now discuss about the two in brief.

Classical Smog was first observed in London thus, it is given the name London Smog. The reason for calling it classical smog is that it arises due to the use of traditional fuel i.e., coal. When coal is burnt then in the atmosphere unburned carbon soot in high concentration along with high levels of SO2 is observed. Hence, we can say, in classical smog, there is carbon-based soot, some solid particulates and SO2 is present. 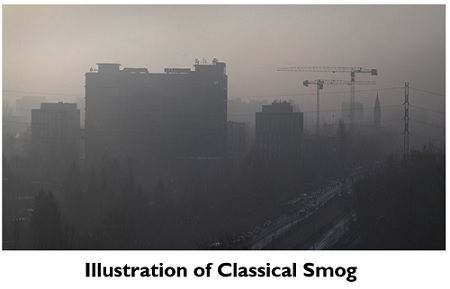 The common producing source of this smog is the burning of coal. This smog exhibits reducing and acidic properties. Since SO2 is present thus, it acts as mild reducing agent and the precursor of a weak acid allows it to deliver acidic along with reducing chemical properties.

When the atmospheric conditions are humid then in that case, then condensation of water droplets that are present in the atmosphere with carbon particles occurs which gives rise to foggy weather. This condition at a serious level occurred for the first time in London in the year 1952 thus given the name London Smog.

It is also called reducing smog, the reason that when coal as a fuel was invented (which is a chemically reducing mixture) then mixture of smoke, fog and sulphur dioxide has put a severe impact on London for centuries.

At that time when London smog occurred then it lasted for several weeks and caused the death of a huge population nearly around 4000 persons due to respiratory disorders. With time, measures have been taken and with technical improvements, the problem has been cured at some level, however, at present the problem of classical smog is still there and is not completely gone.

One should note here that SOx behave in a disastrous manner when it mixes with smoke. And the two combine at the time of temperature inversion. Generally, the condition is severe in the early morning hours and reduces when sunrise occurs. The SO2 in the atmosphere turns into sulphur trioxide because of photochemically induced oxidation. The particulates obtained from the burning of coal provide the region for condensation nucleation where fog droplets condense. Due to the large surface area, catalytic oxidation of SO2 takes place.

Meteorological conditions somewhat increase the type of smog and are more prone to occur in winter mornings.

Now, the other major classification of smog is photochemical smog also called Lod Angeles smog which is associated with emissions obtained from petroleum combustion, generally coming out from motor vehicles. In this type of smog, there is a high level of oxidants and carbon-containing reaction products are included. 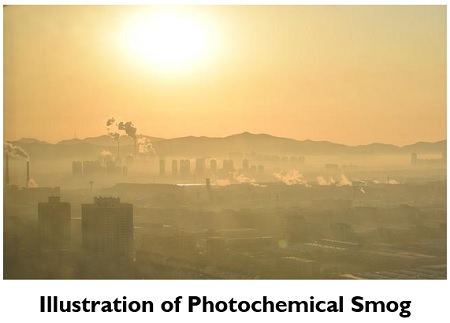 Mainly the products like unburned gaseous hydrocarbons and nitrogen oxides, which are released by internal combustion engines give rise to photochemical smog. Not only this, but specific climatic conditions also support this type of smog.

When atmospheric chemical reactions between nitrogen oxides and hydrocarbons takes place then photochemical smog is produced. The constituents of this smog are nitrogen oxides, ozone, aldehydes, organic oxidants, etc.

In the year 1944, severe air pollution occurred in Los Angeles, California, it has reduced the visibility, caused eye irritation and damaged plant life at a severe level. Different from London smog which occurs in early winter mornings, this smog is severe during sunshine and is at its peak in the afternoon. Here dissociation of NO2 which is an important chemical reaction takes place which occurs due to sunlight.