What is Social Stratification?

In a particular social system, there exist institutionalized inequalities with respect to power, wealth and status, amidst different groups of people belonging to different caste, classes, and sex, which is nothing but social stratification. In various societies of the world, members are classified on the basis of their superiority, inferiority, and equality.

One should note that in all societies, stratification is present, i.e. social differentiation among populations in terms of age, sex, and personal characteristics, etc. Hence, it is that system that bifurcates people in a hierarchy. It is based on four important principles which are:

Simply put, social stratification refers to the process in which members of the society are ranked in a hierarchy on the basis of their status, i.e. power, property, social evaluation, psychic gratification.

The word ‘stratification’ is originated from the term ‘stratum’ that implies layer. In this way, to stratify means to arrange something in layers and stratification is the process of classifying something as per the graded scale. It is characterized by:

Social stratification is widespread, which can be found everywhere. That is to say, all the societies show some level of differences among their people, be it on the basis of age, personal achievements, race, caste, class, sex, etc.

The three main forms of social stratification are discussed hereunder: 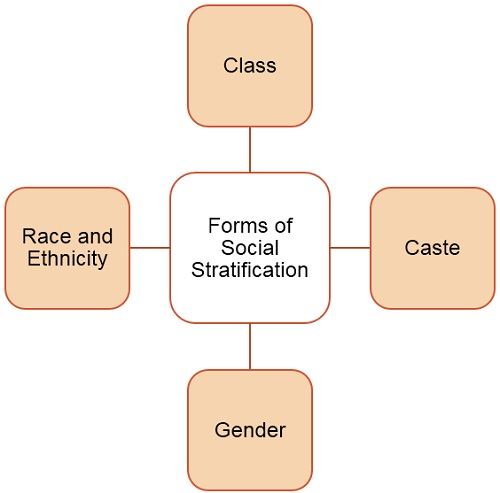 Class is the main form of social stratification that is prevalent in modern civilized society, which hinges on the economic wellbeing of the people living in society. In this system, more priority is given to the material possessions of the person. Therefore, his/her status in society is based on the amount of money they have or they earn or on material success.

Classes are groups of people having similar income sources and have similar economic interests.

A unique category of stratification is caste, which is an occupationally specialized group that is bound together due to the social custom that permits marriage within the same group. It is identified by the fact of ascription or ascriptive inequality takes place when the placement of social class is hereditary.

It is a community as it depends on kinship and primordial relationships. It is a collection of families having common names, descent, etc.

Gender is a social construct that states the roles prescribed specifically for men and women. It is one of the bases of status differences. In olden times women are considered as ‘less’ in comparison to men, which has been changed over the years due to feminists movements.

It is a structure of inequality within the system, which assigns the roles of men and women unequally. It determines difference and domination, by distinguishing between men and women.

It implies a system of inequality wherein race, religion, and nationality acts as a criterion for ranking social positions.

The race is the genetic heritage, that amounts to unique physical characteristics. Ethnicity implies the condition of being distinctive culturally. Such people are closely knit due to their common ancestry and cultural background.

Social Stratification refers to differences between various members of the society that encompasses an arrangement of elements, be it vertically, horizontally, or separately. It is based on the principle of inequality.