Stress is defined as the internal opposition which a body offers when an external force is provided to it per unit cross-sectional area. Stress always acts normal to the plane. Stress is given as force acting on a unit area. And is denoted by σ.

In general, there exist only two types of basic stress namely longitudinal and Tangential Stress. Some other stress which you may come across results from the combination of these two basic types of stress. 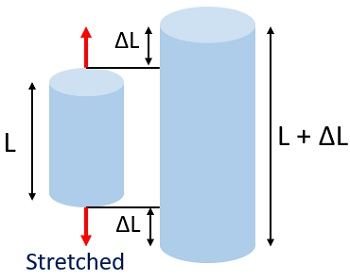 More simply, it is associated with a change in length. This type of stress is classified into two ways:

2. Shearing stress: It is also known as tangential stress. This stress is the result of the action of two simultaneous deforming force acting parallelly to the cross-sectional area of the object. Basically, the applied tangential force-displacement between the two opposite faces of the object. Suppose we are having a cylindrical object then the restoring force produced within it as a result of applied tangential force is called shearing stress.

Hydraulic Stress: Like we have said in the beginning that there is only two basic stress. Then, what is hydraulic stress?

So, hydraulic stress is the result of that force that a fluid exerts perpendicularly on an object present within it. A spherical object when placed within a fluid under high-pressure condition, then it applied a perpendicular force all over its surface leading to cause hydraulic compression. Though the geometrical shape does not vary but its volume decreases. So, the restoring force which is produced in response to the force produced by the fluid is known as hydraulic stress.

Thermal Stress: Previously we have seen that thermal stress is the restoring force developed due to difference in temperature.

This is so because when an object is heated then the entire object does not get heated all at once. Despite this, first the outer layer will be heated and then the inner region. So, whenever a change in temperature deforms a body then the restoring force produced relative to it is called thermal stress.

This is all about stress and its types.