Skip to content
May 9, 2022May 7, 2022Computer Architecture, ITNo Comments on Structure and Function of Computer

Being a complex system, the computer contains millions of electronic components. To understand the structure and function better we organize these electronic elements in a hierarchical structure.

Structure and Function of Computer

If we generalize the functions of the computer, we can divide them into four categories. The four basic functions are as below: 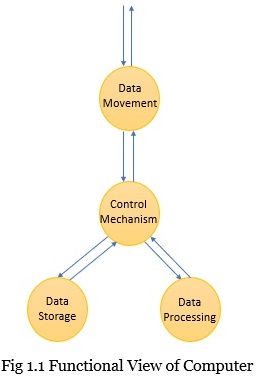 The figure above shows the four basic functions of the computer. Let us understand each of these functioning units.

Once the processing has been done there must be some means to store the final and intermediate results. Even though it seems that we enter the data into the computer, it processes that data and immediately produces the result. But still, the computer needs to store those pieces of data that are being worked on at the current moment.

The operating environment of any computer requires both input and output peripheral devices. The computers are also capable of moving data over a longer distance i.e., to or from a remote device. We refer to this moving of data between the remote devices as data communication.

We have learned about three functioning units’ data storage, movement and processing. As they are interrelated units, we require a unit that would control and synchronize the function of these units.

However, controlling of these three units is regulated by the individual who provides the instruction to the computer. In response to these instructions the control unit manages the resources of the computer and controls the performance of the functional units.

Knowing about the functional units lets us proceed with our discussion about the structure of the computer.

If we talk about the structure of a computer it is composed of several components. We can broadly classify these components into four types: 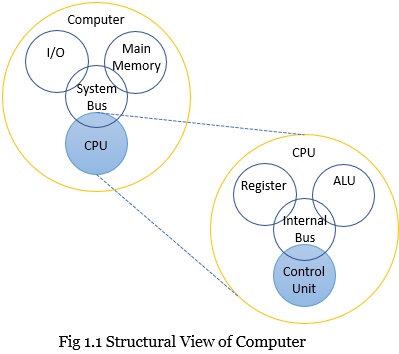 A computer may have one or more of the above-discussed components. The traditional computers had a single processor but the modern or advanced computers have multiple processors. Even the processor can be classified into the components discussed below:

There are several ways to implement the control unit of the processor one of which is the microprogrammed approach that operates by executing the microinstructions.