This solution can be encoded in a simple C program as you can see below. You can notice we have a global variable count which would declare the number of items currently present in the buffer and the size of the buffer is N.

The producer even checks if the buffer was empty before the addition of the item which would have let the consumer process go to sleep. So, it also gives a wake-up call to the consumer.

Similarly, the consumer process verifies if the buffer is empty then it will go to sleep, and if it not then it would remove one item from the buffer and consume it.

The consumer process would also check that before the removal of items from the buffer was the buffer full. If so, seeing this the producer might have gone to sleep then it also sends a wake-up call to the producer process.

The solution to the synchronization problem above can be understood as

The code below verifies all three solutions we discussed above for the readers-writers problem.

To understand the dining philosopher’s problem, consider the scenario that there are five philosophers who are sitting around a circular table. Their only work is to think and eat. 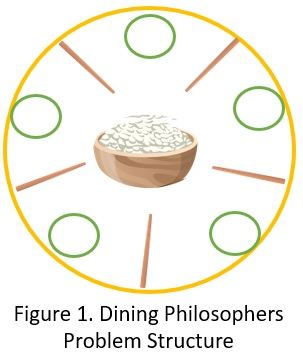 The problem is that if two adjacent philosophers try to eat at the same time, they may get blocked forever and may lead to the race condition. To avoid this each chopstick is represented using semaphore. To grab the left and right chopstick we must use down() operation and to release the chopstick use up() operation.

With this structure, we can restrict two neighbors from trying to eat at the same time.