What is Thermionic Emission?

Thermionic emission is a single term that describes an act of liberation of ions when thermal agitation is provided. The combination of the words thermionic and emission to form a single term is used to describe the release of subatomic particles (specifically electrons) by the action of heat. This is so because, in earlier times, the charged carriers were regarded as thermions.

It is also known as the Thermionic Effect. More simply, thermionic emission is the release of electrons from a metallic surface when a sufficient amount of thermal energy is provided to that material.

Origin: The concept of thermionic emission was proposed by Thomas Alva Edison in the year 1883. Thomas was working on one of his experiments where he was trying to find the cause for the breaking and uneven blackening of the filament within the bulb.

We all are aware of the fact that each individual entity in this universe is made of the smallest indivisible particle, regarded as an atom. The atom consists of three subatomic particles, namely electrons, protons and neutrons. The structure of an atom is such that the protons and neutrons comprise the nucleus of the atom. And the electron orbits the nucleus in the outer shells.

At room temperature, the electrons in the material do not have a sufficient amount of energy by which they can overcome the force that binds them to the nucleus of the atom. Thus, they get orbits around the nucleus; hence emissions do not take place.

Now, further, when some external heat is provided to the metal then, the action of thermal action raises the kinetic energy of the electrons within the metal. Due to this supply of energy, the nuclear force of attraction between the subatomic particles of the atom (i.e., electrons and protons) gets breakdown. Hence, the electrons get released into space.

Also, with the increase in the supply of thermal energy, i.e., when more heat is provided to the material, then a comparatively large number of electrons get freed in less amount of time. 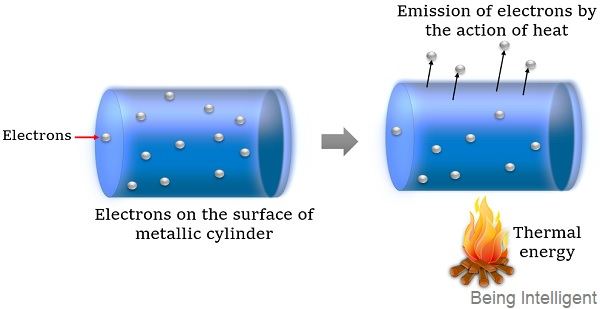 This complete process of emission of electrons from the surface of the metal by the action of heat is thermionic emission.

The value of φ is different for different metals, and its unit is electron-volt. Generally, this lies between 1 to 6 eV.

So, after the liberation of the charges from the surface of the metal, then an equal number of charges with the same magnitude but opposite in polarity  remains in the region from where the emission of electrons takes place.

The factors that affect the thermionic effect are as follows: 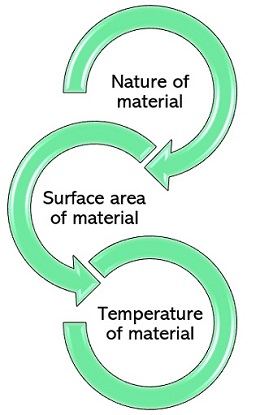 Thus, combining the three factors as a whole, we can say that to have better thermionic emission, the metal should possess a low work function along with a large surface area and a high value of the melting point.

The emission of thermions depends on the nature of the material, along with its surface area and temperature.

Thus, mathematically it can be written as:

: T denotes the temperature of the surface,

φ denotes the work function of the metal,

k is the Boltzmann’s constant,

Js is the saturation current density and

A is the Plank’s constant

This is the Richardson-Dushman equation, and we could write it as:

The graph given below represents the Richardson-Dushman equation for various types of emitters: 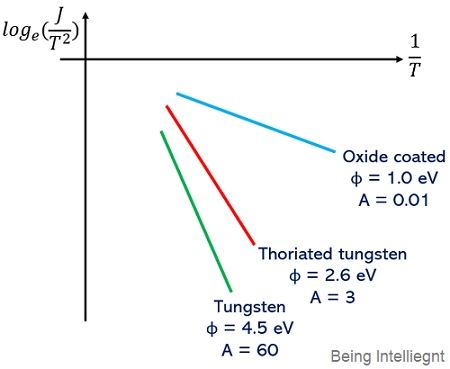