In today’s content, we will discuss what a thread is in the operating system as well as we will also discuss the kind of threads along with the advantages of threads. So let’s begin.

First, let us discuss the structure of a thread. A single thread has its particular thread id, which is its unique identification, it has a program counter, a set of registers, and a stack. Now, we know that a process may accommodate multiple threads and such processes perform multiple tasks at a time.

Threads associated with the same process use the same data section, code section, and system resources such as files and signals. In the image below, you can see a process with a single thread and a process with multiple threads. 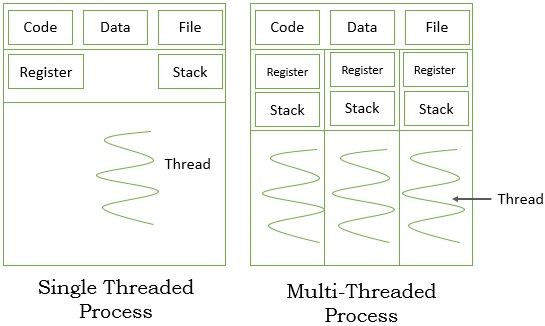 This is how multithreading supports multitasking.

Must Read: Booting in Operating System

One of the reasons for creating a thread is that as the threads are lighter in weight, they can be created and destroyed very rapidly, which in turn saves time. In case all the threads are not CPU bounded and the system has substantial computing and I/O, then activities can be overlapped and thereby increases the speed of an application.

Threads can be User-level threads and Kernel level threads. We will discuss both threads in brief.

Advantages of Thread in Operating System

So, this is all about the thread in the operating system. It is economical to use threads instead of creating multiple processes for the same task. Thread raised the concept of multithreading.